Driving south on Indian Garden Road, Walloon Lake’s speed limit slows to a leisurely 25 miles an hour. Dazzled by the lake’s blue expanse on the left, it’s easy to miss the four diminutive, vintage-style cottages in a row on the other side of the road. Nestled into narrow, sloping lots with large, inviting porches, they look as if they’ve been there for years.

That’s exactly what builder Jim Meathe and Greg Presley had in mind when they designed the new homes on the lake’s north end in 2007. The pair studied Walloon’s traditionally modest-size cottages and other local architecture, including the Victorian resort communities of Bay View and Wequetonsing, for inspiration.

"Blending in and honoring the area’s historic style was definitely a priority," says Grosse Pointe-raised Meathe, who lives in Atlanta but keeps a summer home on the lake. Size—or rather, the lake of it—was key, too.

"Since the 1990’s, there’s been a tendency on Walloon to build big houses," adds Northville-based Presley, who has a compact, 800-square-foot cottage nearby. "These homes are refreshingly smaller. I’m a firm believer that you need less square footage than you think." 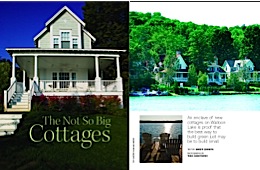 Buy the August issue of Traverse, Northern Michigan’s Magazine and get all the photos of the Walloon Lake cottages plus resource information! Just click on the photo!

The four homes, which measure approximately 2,000 square feet each, replaced two neglected properties previously on the site. Working with tight, 50-foot lots means there’s little room for wasted space, says Presley. Exterior porches, a single dining area, interconnected rooms and nine-foot ceilings help the cottages live large. "Every room gets used," Presley insists. "There’s no duplication of space." Because smaller homes use fewer materials and resources, they’re "greener" than larger homes, he says. "The emphasis is on the quality of the home, not the quantity."

The architectural styles vary from farmhouse to Craftsman, yet all fo the cottages feature open floor plans, abundant natural light, and walkout lake levels. "On smaller lots the challenge is to get the most rooms on the view," says Presely. "In this case, the sloping lots also have a 40-foot change in grade between the back of the lot and the lake, but that enabled us to include the lake levels."

The old fashioned-looking homes are also equipped with modern amenities such as first-floor laundry rooms and updated plumbing. "I wanted the houses to look 100 years old outside, but contain every modern-day convenience inside," says Meathe. "No one wants old bathrooms or kitchens."

The blend of old and new appealed to Brian and Deb Miller of Hinsdale, Illinois, who purchased the fist completed cottage—a Victorian farmhouse design. "We walked in the door during an open house and fell in love with the charm, the layout, the front porch and the view," Deb says. The family visits year-round. When the weather is good, days begin and end on the porch. "Our lives are really fast-paced, but when you go up to the lake and sit on the porch, it’s instantly relaxing," says Deb. The Millers bought the home completely furnished. The living room features a traditional stone fireplace and lake views, and an old-fashioned pergola welcomes family and friends.

Meathe and Presley have gone to work on other custom homes on Walloon, but the Indian Garden project remains a favorite for them. "This was a great opportunity to bring an intimate project to Walloon," says Meathe.

Mark Your Calenders for the 2009 Ultimate Up North Kitchen Tour!