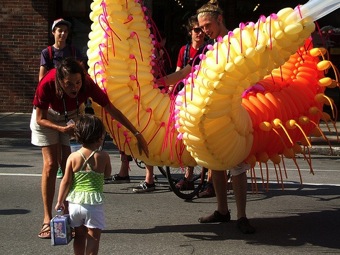 A s is fitting for an event that started out as little more than a dream over a plate of pasta at Amical restaurant, there was only one way to describe the atmosphere at the 5th Annual Traverse City Film Festival kick off street party: Surreal.

Salsa music and hard-driving blues-rock provided both ends of the sonic sandwich that was Traverse City’s Front Street (provided by Rojo Loco and Charlie’s Root Fusion respectively) but once beyond the small groups of dancers and revelers that bunched at either end, it was a decidedly different scene.

Giant, brightly colored balloon creations, courtesy of New York artist Jason Hackenwerth, strolled up and down the street.  The dreamlike creations, resembling Day-Glo crestaceans and manned by a sole volunteer, shimmied their way through the crowd, posing for photos and engaging in bizarre dance battles that frequently ended with a staccato pop.

Add to this strange landscape a juggler on a 6-foot unicycle in top hat and Hawaiian shirt juggling knives, and a very pale Charlie Chaplain making the rounds in full-on, stone silent, “Little Tramp” style, and you’ve got a welcome the TCFF that was altogether unique.

Taking the stage in front of the State Theatre a bit later, TCFF founder, filmmaker, and Traverse City icon Michael Moore took the stage to formally welcome the crowd to this year’s festival. After delivering some good news about the festival’s present standing (more than 80,000 tickets sold, almost selling out the TCFF entirely) and its future (a 39 percent increase of sponsorship, despite financial hard times) of the festival, Moore along with TCFF co-founders Doug Stanton and John Robert Williams presented local documentary director Rich Brauer with the festival’s Michigan Filmmaker of the Year award. Upon handing Brauer the award, Moore remarked, “It is wonderful to give this award to someone who didn’t go off to Hollywood, but rather stayed here in Michigan to make films.” The push to retain local talent and further develop Michigan’s burgeoning film industry would be sentiments echoed throughout the evening.

Following words from Moore, Brauer, TC mayor Michael Estes, and the appointment of Susan Brown and Jason Pollack as honorary co-chairs, it was time to get the festival started in earnest. Eschewing a traditional ribbon cutting, the festival was ushered in with a more representative gesture: The tearing of a cartoonishly giant ticket.

Following the ceremony, a line of film fans wrapping well down the street were packed quickly into the State Theater for a brief intro from Norwegian director Erik Poppe before his film, Troubled Water.

Troubled Water tells the twin tales of Jan and Agnes, two people who’s lives intertwine when Agnes’s son four-year-old disappears, dying in a river. Jan, the kid responsible, goes to jail and we pick up with him eight years later, fresh out of prison and looking to find redemption as an organist at a local church. Agnes, meanwhile, still struggles to make sense of what happened with her husband and her two adopted daughters. The film deftly cuts back and forth between Jan and Agnes’s stories, cutting between Jan’s present quest for solace and the events that led to the death of Agnes’s son.

It’s a dark film that frequently calls to mind the somewhat similar In the Bedroom.  But where that film looks a family rent asunder by the death of a child and finds only pathos and a grim feeling of hopelessness, Troubled Water sees the faintest glimmers of hope and salvation, though admittedly those glimmers are shrouded in grief and loss.

Following the film it was off to, strangely, the Wade Trim parking lot for one of the high points of the TCFF: The Opening Party.  Held beneath a cloudless summer sky and lit with gently diffuse Chinese lanterns, the party was equal parts opportunity to enjoy great food, meet fellow film fanatics, and try some of the brilliant food and spirits available from local wineries and restaurants. Not to mention it also heralded the return of Jason Hackwerth’s dreamlike balloon creatures, who quickly fell back into their rhythm of messing with the crowd, hanging back, then resuming their perpetually mystifying dance-fight mating ritual.

Lasting well into the evening, the party eventually wound down as the midnight hour approached and the moon hung low in the sky. As the last of the revelers spilled out onto the streets of Traverse City, buildings run with the echoes of laughter and conversation.  What about?  Well, that’s simple.  It’s like the slogan says: Just great movies.