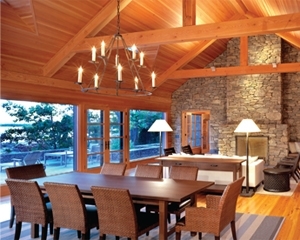 Consider stone. Its aged beauty fostered by the earth for eons; its stubborn insistence on anything but the simplest of building methods (stacked, mortared). Structures built with rock are grounded in a timelessness that unites vernacular architectural styles from some of the world’s most inspired landscapes—the Alps to the Adirondacks, the cobblestone streets along a Norwegian fjord to the stone foundations of Northern Michigan’s coastal farmsteads.

So imagine the delight of husband-and-wife architect/design team Ben Begley and Kathleen Wills when clients commissioned them to design a home at Leelanau County’s northern tip that would use stone extensively. For Begley and Wills, who live on neighboring Old Mission Peninsula (where Wills designs furniture and dinnerware for Crate & Barrel), the commission only became more enticing when the clients also envisioned a home that would blend into the dunes of the Lake Michigan shoreline so as not to disturb the view of the coast from the water.

Begley laid out a classic blueprint: a rectangular core flanked on one side by two much smaller square structures. One, connected to the house, is the master bedroom. The other is a separate home office. On the water side, the carefully situated home peeks over a dune. Organic materials—timbers, a gray metal roof, generous use of glass, and the extensive stone work—and puttycolored trim merge the home into a stand of oaks that edge the sandy beach.

But from the approach, a two-track lane that leads to it, the home’s two levels and pea-stone courtyard embraced by a stone wall are in welcoming view. From the courtyard the home’s exterior moves to a blend of stone, mortared timbers, French doors and rustic shutters. The effect is an emotive fusion of farmhouse, lodge and country estate. During construction, Begley and Wills worked closely with contractor David Webster. Begley and Webster are longtime friends (they were in the same drafting class at Traverse City Central High School in the 1970’s) and have worked on several projects together. The relationship proved invaluable in achieving the level of craftsmanship Begley and Wills planned for the home. 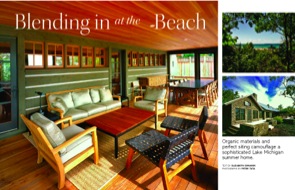 Buy the Blending In at the Beach Issue and get Discovery Channel Danny Forster’s Omena Project plus more! Just click on the photo!

The great room is defined by the fir paneling that clads its cathedral ceiling and two long walls. A row of three, triangular, recessed windows in the ceiling flood the grand space with natural light. Inspiration for the windows, says Begley, came from a trip he and Wills took to Finland in 1986 when they saw similar windows at the National Museum of Finland, designed by renowned architect Eliel Saarinen in 1902. “We loved the way that they looked on that building and have always wanted to incorporate something similar in the appropriate structure,” Begley says.

The couple also drew on their European travels to incorporate distinctive niches, such as the window seat, next to the stacked stone fireplace, that looks out onto the exterior stone wall of the master bedroom. The setting evokes an ageless farmhouse that has been modified over the years. “We love views of structure, and architectural detail,” says Begley.

The owners requested that the design team completely furnish the home, and Wills’s sophisticated eye for detail shines through in the choices. The built-in cupboards in the open, galley-style kitchen, with its sandblasted glass tile backsplash and absolute black granite countertops, are stocked with a line of Crate & Barrel dishware designed by Wills. She also designed a number of custom furniture pieces for the home, including a handsome wood sideboard in the screened porch off the kitchen.

Details aside, the home’s dominant theme is the view of Lake Michigan that splashes across its south-facing facade through paned windows and French doors. This elemental structure of stone, wood and glass, nestled into hardwoods and tucked behind a dune, is a magnificent perch from which to see the boats rounding the Leelanau Peninsula tip, but not to be seen.

Mark Your Calenders for the 2009 Ultimate Up North Kitchen Tour!