Harbor Springs: A Fairytale Escape with a French Twist 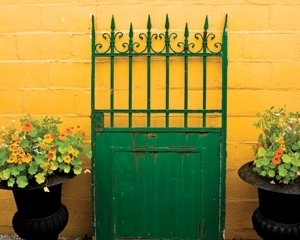 Back when Father DeJean arrived in what is now Harbor Springs, there was nothing but forests, gurgling springs—for which the city was eventually named—and the grand bluff that looks out over that deep blue. When he was not saving pagan souls, De Jean helped teach the Odawa rudimentary farming. In return—and by the time the first shoots of squash and beans poked through May’s chilly soil—the Native Americans helped him build a crude log chapel near the shore. In ill health, De Jean departed for France two years later. But not, I’m convinced, before he’d invoked a blessing of eternal Frenchness (for want of a better word) on this Great Lakesbackwater.

Today, nearly 200 years later, Holy Childhood of Jesus Church, the direct descendant of that original log chapel, still dominates the town. Drive west into Harbor on M-119, and the handsome steeple stands out with that authoritative, all-roads-lead-to-me mien of a French provincial church. Main Street does, in fact, end at the church doors—a geography that would have been destroyed in the 1850’s had not the church’s parishioners, still largely made up of French and Native Americans back then, thwarted a plan by presumably Protestant town fathers to use the interim between the razing of the old log chapel and the planned construction of a new church to extend Main Street through the site. Holy Childhood’s wily flock simply built their new church around the old log chapel, then carried the logs out the new vestibule.

Wander Harbor Springs streets today, and you are gloriously engulfed in its Frenchness. Consider the antique shops: pretty pink Joie de Vie (was that Edith Piaf I heard singing in the background?) at the south end of M-119, and L’Esprit with its two stores, on Main and State, stuffed with antiques and other delicious French sundries from soap to the antique hand-blown wine bottles, les bonbonne en verre. Then there is Pooter Olooms—sounds Scandinavian but the shop has made a name for itself for both Scandinavian and French antiques—and artist Pierre Bittar’s gallery and Cornichons Market and Deli and Dressed the boutique on Main Street that carries Petit Bateau …

And where do Harbor Springs’ folks go when they aren’t in this village by the bay? My friend Julie Bacon, who hosted me while I was in Harbor last summer on assignment to probe the heart of this town, has a house in Southern France. Turns out there’s something of an ex-pat Harbor community growing up there.

And then this happened, really: Julie, off to yoga, sent me up to breakfast at a local diner called Out To Lunch. I was minding my poached eggs and toast when the two guys next to me—dressed in working men’s clothes—tossed change on the counter for a tip and walked out. The waitress picked up the coins, puzzled over them, then showed them to a sinewy, tanned patron reading the paper at the far end of the counter: "Zay are francs," he said, his accent pouring out rich as a Bordeaux, then went on to explain how the coins were worthless since France had changed its currency. “Zat was mean,” he added, eyebrows lifted at the coins.

Buy the August Issue and get more of Pascal’s shopping tips! Just click on the photo!

His name was Pascal Frapech, he was from Southern France, and he was working as a personal chef for a wealthy family at their summer home on Harbor’s well-heeled Lower Shore Drive. When the muses scream, it’s time to follow.

I trailed Pascal for the rest of the day as he purchased the freshest ingredients from the cornucopia that flows in from the hills and waters around Harbor Springs and beyond. With a promise that he would email me a menu and recipes we bid à bientôt at the end of the afternoon.

He was true to his word. I’ve rounded out Pascal’s courses to include tips on where to shop and stay while you cook up your own French magic in Harbor Springs.

Click here to get Pascal’s Menu for a Harbor Springs Dinner.

Find ideas, tips and hundreds of links to fun, food, activities and recreation in the Harbor Springs region!