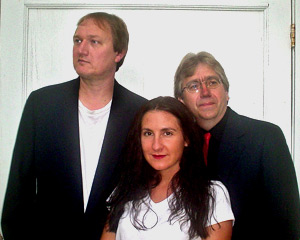 “I’m so used to just talking about beer,” Mike Dwyer said as he slid into a window booth at Mackinaw Brewing Co. “This is a nice change.”

The 43-year-old head brewer at Mackinaw Brewing Co., was eager to talk about The Weather—his three-piece progressive, folk rock band that will perform live at the restaurant Saturday, July 18 at 10 p.m.

“I used to want to be a professional musician and brew as a hobby, but, 10 years later, it’s the opposite,” said Dwyer, who plays the acoustic, electric and lap steel guitars for The Weather. “I’m a brewer that plays music, too. It makes making music more fun though—the fact that I don’t rely on it to support my family.”

“Making music is something we all love to do,” Murra said. “We get together to practice once a week. That’s our fun time.”

In addition to weekly practices, The Weather has performed at Mackinaw Brewing Co. every six to eight weeks since September of ’09. And to their knowledge, performances will continue on the same tentative schedule.

I always said I’d never play music where I work, but this opportunity was too good to pass up, Dwyer said.

Even Murra had a brief stint serving at the restaurant when it opened in 1997.

The Weather’s sound is "kind of an oddity in Traverse City,” Dwyer said with a smirk. “We don’t fit everywhere.”

Incorporating a wide variety of instruments, such as bongos, xylophones, a recorder and a lap steel guitar, is perhaps what caused The Weather to blur the lines between folk, rock, acoustic and electric in the first place. But it works.

It’s not an easy task to pinpoint the unique instruments on each of The Weather’s 19 original tracks on their self-titled CD, which is perhaps a sign they’re being used correctly, melding to create a unified sound. And while the lyrics are unquestionably secondary to the instruments in many of the band’s tunes, it’s solely because the music is so strong. Murra’s voice is engaging, but she could be humming along aimlessly and it would still be equally soothing and easy to listen to.

They are a band to hear and see.

Photo(s) by Courtesy of The Weather