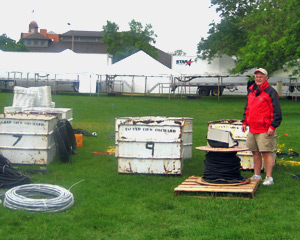 We caught up with Tim Hinkley, executive director of the 2009 National Cherry Festival, as he was busy making sure everything was shipshape for the festival kickoff July 4.

Have you been involved with the festival before?

I have only been to one. I went to last year’s, but this is my first time behind the scenes.

What made you want to get involved with the festival?

I retired and decided that if something came up that was in my field (hospitality business) and sounded like fun, I would go ahead and do it because I was too young to retire.

My wife and I have been coming up here for years. My sister lived in Kingsley, but I had never come up during Cherry Festival time until after we moved up here permanently in 2007. The executive director Tom Menzel announced he was leaving at the end of 2008, and I talked it over with my wife and said, ‘This might be that opportunity I spoke of,’ and I interviewed for the job. It looked like fun and a challenge.

Have you made any changes to the festival for 2009?

We have made certain changes and added some things, but so many of the things people are used to haven’t changed. Parades, fireworks, the air show and all the cherry related events are the same. But there are different food vendors and marketplace vendors and different entertainment. We also created Heroes Day. That is a July 6 celebration of veterans, active military, police, firemen, homeland security and EMS. They’ll come down, and they’ll be given a medallion to wear around the festival grounds. We might have something special for them and something for them on the festival grounds. And that night they’ll get into the concert for free if they’re wearing their medallion.

How has the weather affected festival preparation?

You can’t control the weather, so you just work with it. You’re wasting your time if you want to worry about it. Worry about the things you can control. All of the setup is going on now, and we’re making sure everyone is on the same page. Everyone is doing a great job.

What is your biggest priority at this moment?

We just have to get things set up, and I think everything will all fall in line. A whole bunch of people are descending on Traverse City this weekend and we have to be ready.

What NOT to miss at the 2009 National Cherry Festival.