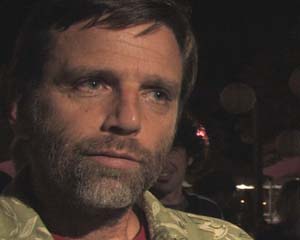 Rich Brauer, winner of Michael Moore’s Traverse City Film Festival’s Michigan Filmmaker of the Year award for 2009, is one of those guys who has done it his way. He started Brauer Productions in Traverse City in 1977 and while he has done work for commercial clients all over the world, he never moved out of Traverse City. When he began working on and producing feature films, he didn’t move to Hollywood or New York. Brauer has stayed committed to this region and to telling stories that live and resonate in the heart of the Midwest and Northern Michigan.

Brauer has created or worked on nine feature films, including photographing and editing both of Michigan-native Jeff Daniels’ independent feature films, “Escanaba in da Moonlight” and “Super Sucker”. Brauer’s own films have told tales that live in the fiber of Northern Michigan. Barn Red stars Ernest Borgnine and tells the story of a seasoned fruit farmer who finds himself at risk for losing his family farm. Barn Red wasselected in 2004 to beincluded in thetraveling Smithsonian exhibit "Barn Again." The film was also screened in select communities all across Michigan as part of the Michigan Barn Preservation Network.

Mr. Art Critic was shot on Mackinac Island and tells the story of an art critic from Chicago, played by Bronson Pinchot, who arrives on the island as many do, to get away from it all. He finds himself embroiled in a local art competition and the story brings on such laughs it received an Honorable Mention designation at the 2009 Christopher Wetzel Award for Independent Film Comedy Festival as part of the Gene Siskel Film Center’s collaboration with TBS Presents "Just for Laughs: A Very Funny Festival. Brauer’s next film is called "Fitful," a dark comedy filled with suspense about a 400-foot ship on a desolate waterfront and is due out, possibly, by Christmas.

Brauer works out of a fabulous, old house on Union Street in Traverse City, remodeled to hold rooms filled with state-of-the-art equipment. He has been an unwavering supporter of local film, local filmmakers and lent his expertise and talents to many causes dear to the hearts of those who love Northern Michigan. Congratulations to Rich Brauer, Michigan Filmmaker of the Year!

Get some inside tips from the Traverse City Film Festival’s Executive Director, Deb Lake, on what to do if a movie you are dying to see is sold out, what’s new this year, and what’s her favorite part of the film festival.