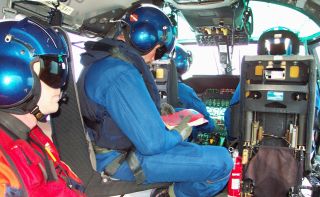 After an extensive search, four men, ranging in age from 52 to 76, were rescued.  They are darn lucky to be alive.

But neither luck nor divine providence were at play; rather, it was the committed effort of rescue responders. “The Coast Guard threw everything we had at this case,” said Captain Fred Midgette, Commander, Sector Detroit. The search area covered the entire western basin of Lake Erie.

The rescue armada involved a score of surface and air resources from a number of agencies, including the U.S. and Canadian Coast Guard, and Monroe County Sheriff’s Department. The one resource of utmost importance, however, that contributed nothing to the rescue was the fishermen who had the most to lose.

Unlike a car accident that ends with the accident, the ordeal often just begins with a boating accident.  This isn’t to suggest that their ordeal could’ve been avoided, but that isn’t the issue. The issue is they could have contributed to a hasty rescue had they exercised foresight. In hindsight, I’m sure they would agree.

Now the story with life-saving advice.

The fishermen had departed Monroe, Michigan, Thursday, July 2, at approximately 8 a.m. for a day of fishing on Lake Erie.  After catching their limit of 20 walleye, they headed back to port Thursday evening. According to one of the fishermen, they had placed coolers containing the walleye at the bow. This extra weight forward lowered the bow as it plowed into 2-4 foot seas, which poured water over the bow into the boat, causing it to capsize.

Three of them managed to don life jackets as the boat swamped.  One fisherman attempted to don his life jacket while in the water but couldn’t. I plead with boaters to have life jackets readily available: better yet, wear them when operating small boats rough seas or not. After 24 years of writing these stories and as a former Coast Guard rescue responder, it never ceases to amaze me how quickly small boats capsize.

Although they had flares, a hand-held VHF marine radio, cell phones, and  GPS, these items were rendered useless once submerged in water, especially the cell phones.  Coast Guard Commander Dave Beck, who owned a recreational boat, said: “I placed spare flares in the life jacket pockets and carried a cell phone in a water proof container on my person.”

May I add, Commander, a floatable grab bag containing these devices sealed in water-proof Zip-loc-like bags is another option.  These devices are a boater’s sure link to rescue responders: protect the devices and they will protect you.

The fishermen reported that searchers flew over them several times, but failed to see them. I spoke with Lieutenant Nathan Noyes, a Coast Guard helicopter pilot, about the night vision goggles that pilots wear. Through the eye of the goggles, the water surface appears as a green hue. Goggles can’t detect color differences, still a light source will standout like a sun spot amongst the green dim. The goggles can magnify the point of light up to 3,000 times the intensity of the light source. A strobe light, glow stick, flashlight or flare will appear as a bright green beacon.

A point of light on the surface at night is arguably more detectable than an object during the day with the naked eye. “A person in the water can be like spotting a dinner plate bobbing on the surface,” said Lieutenant Noyes.  That is, I might add, unless the boater also has a flare or signal mirror to catch the pilot’s eye. Bright-colored life jackets like orange or yellow also help attract attention.

In the end, it was the keen eye of an airman on the Monroe’s sheriff’s helicopter that spotted the fishermen. “It was a stroke of good luck,” said Joe Schumaker, the pilot. At first when they spotted the object it appeared too small to be a boat.

His flight crewman, Deputy Don Duncan, added: “You don’t realize until you get up there how big that lake is. It’s the proverbial needle in a haystack.”

What allowed searchers to narrow down the search area that led to the rescue came from a red cooler picked up by the crew of a Coast Guard Auxiliary boat involved in the search. Family members confirmed that the fishermen did have a red cooler aboard.

That input could well have saved their lives since evening was approaching; it’s doubtful they could have survived another night. Such detailed information on a greater scope may have saved them much sooner.

The valuable lesson here is that loved ones should know boaters’ patterns and be aware if those patterns are broken. For example, when the operator of the boat failed to return as planned around 6 p.m., his wife didn’t call the Coast Guard until 10 p.m.. Should she have called sooner?  Maybe, if he consistently arrived home at dinner-time after a fishing trip. This is a judgment call; however, sooner is always better.

But in all due respect to the wife, her husband, who last called her at 12 noon, failed to call again and update her on his current status and a new fishing location away from his normal fishing haunts.

That simple call would have prevented a complex search and their near demise. Boat Smart. Take command. It’s your call.

Tom Rau is a retired 27-year Coast Guard veteran, boating safety columnist, and author of Boat Smart Chronicles, Lake Michigan Devours Its Wounded. His book is a 20-year journal of recreational boating mishaps with valuable lessons learned. It, along with recent rescue stories, can be viewed at boatsmart.net.