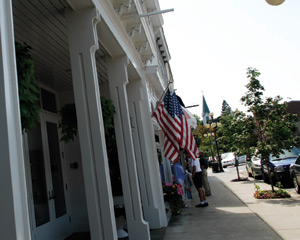 We asked the North to tell us its all-time favorite small-town Fourth in the North bash and the results were (ballot, please) Harbor Springs! Click here to see the results.

Given the overwhelming results, we dialed up Scott Herceg, executive director of the Harbor Springs Chamber of Commerce, and asked him if July 4, 2009 in Harbor Springs was the best Fourth in the North. Scott was still frozen in a state of perma-grin after the holiday but he managed to describe one heck of a day. Saturday, he told, us saw the longest parade in Harbor’s history (over 100 entrants) that wound down Main Street then back up Bay AND the biggest crowd folks said they’d seen in years. Word on Main was that the throng was 20 tanned and happy bodies deep. Among Scott’s favorite parade participants: The All-American Wiener (dachshunds) Dogs and their owners; the Bat Mobile (why a Bat Mobile in Harbor is anyone’s guess); the Beach Queens—woman of, shall we say, a certain age, struttin their stuff—stuffed into those shirts emblazoned with bikini-clad pin up bodies. You go Beach Queens!

Scott says there was a reverent side too. The parade was led by veterans of wars from World War II to Iraq. And the Little Traverse Bay Band of Odawa Indians had a float devoted to our Native American veterans.

As night fell on the little town by Little Traverse Bay, people gathered on the beach and in their boats for fireworks. Tradition has it that Petoskey town fathers duke (make that toss bean bags) it out to see which town gets to send the first fireworks into the sky over the bay. Herceg’s team lost in a heart-breaker of a last toss to Petoskey. But not to worry—no sooner had Petoskey sent the first sparks into the air then that stalwart crew charged with lighting the fireworks in Harbor Springs let loose with a kaleidescope of sparks that let the shoreline know their town doesn’t take the backseat to anyone.

And so it went until the grand finale that faded into the Northern sky with boats honking and the crowd hooting and hollering. "It was just a great, festive atmosphere," Herceg says.

Want to share your own tales of Fourth in the North? Download your photos and stories in our MyNorth Scrapbook.