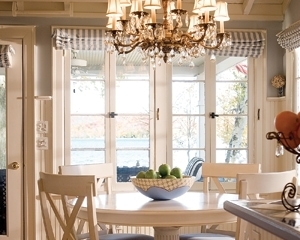 To see more of architect Greg Presley’s work, pick up the August issue of Traverse Northern Michigan’s Magazine on the newsstand and look for the article in Northern Home & Cottage entitled The Not So Big Cottages.

If this were a children’s story it would read something like this: The tiny fishing cabin on Walloon Lake near Petoskey sat forlorn and neglected. Then one day a wizard charmed it, and it became a grand lakeside cottage. The moral of the story? Beneath its fine decor and bold facade the diminutive structure kept true to its humble orgins.

And that is the tale of the Presley home—except that the wizard is architect Greg Presley. When Presley, who makes his living designing upscale homes downstate, discovered a small lot on Walloon Lake, he knew it was the place for his family’s Up North getaway. He also knew he’d have to dig deep into his architect’s bag of tricks to make it work. The lot housed a 1950’s shoebox structure—once uswed as a fishing shanty—sandwiched between other cottages and crammed into 50 feet of lake-acess property. Minus the 10-foot setbacks, Presley was left with a workable 30 feet of land that sat on sugar sand with a foundation that wasn’t sufficient to allow for building up—an equation that left him 773 square feet in which to squeeze a floor plan.

Presley refused to be hemmed in, building—if not big—then boldly. He kept the old shanty, transforming it into what his neighbors call a mini-mansion: a Greek Revival exterior complete with columns, pediment and a 30-inch frieze. On summer days, an American flag billows out from a front porch that doubles as an outdoor living room where a soft, striped couch sits between two armchairs. A downdraft fan keeps the bugs away on windless days, and a lower porch provides a dining room table for dinner under a starry sky. "For people who enjoy summer, the front porch is the living space," says Presley.

But Presley’s genius really showed on the inside, a design job that he says "made me think in cubic inches, not feet." Presley played with perception to combat the house size by constantly drawing the eye up. To make the 12-by10-foot living room appear larger, he placed wainscoting nearly halfway up the wall, added a high window in the room and raised the fireplace a foot off the ground. In the front and side of the cottage, Presley put in a bank of windows to bring in the outdoors and open up the home. He spruced up a couple of old armoires for closets in the two bedrooms and made built-in sleeping berths in one of the bedrooms.

Presley had the sink in the tiny kitchen installed at an angle to allow for more staging space and a view of the lake. A counter over the washer and dryer in the laundry room doubles as a wet bar when company comes. The loft Presley tucked under the porch’s roofline is perhaps most ingenious of all. Accessible by an indoor ladder, it’s big enough to hold threeair mattresses—the perfect hideaway for his teenage girls to clamber into, close the hatch and watch a movie.

Presley’s wife, Lois, worked with her brother, Ed Postif, an interior designer, on the decorating scheme. The pair took their cue from the cottage’s new bold facade, hanging a chandelier Lois describes as both “whimsical and monumental” over the table in the demi-sized dining room. Their inspiration for the home’s blue-, red- and yellow-checked color scheme came from the early 20th-century work of Swedish painter Carl Larsson. After three summers in their Up North getaway the Presleys have found that the cottage’s small size is just big enough. “It makes us live more casually and simply,” says Lois, adding with a smile, “it’s easy to clean.”

And that is a very happy ending.

This article originally appeared in the July 2006 issue of Northern Home & Cottage.