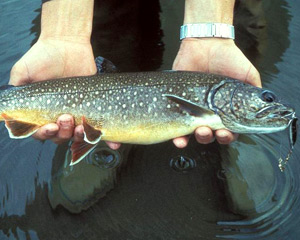 Picture a food web. Think back to elementary school and that big, laminated poster showing how the wolf eats the rabbit that eats the grass or how the bigger fish eat the smaller ones.

Now, picture two links wiped out of the middle of that chain. Erased. Deleted. What happens? Does the web fall apart, or do new connections form as creatures explore new food sources, resulting in a food web that has a new, unexpected pattern?

This is essentially what has happened in Lake Huron in the past six years, and experts are still looking for more complete answers to these questions as they plan for an uncertain future.

Changes in the lake are far-reaching, but at the center of them is the humble alewife. This small, non-native fish made its way up the St. Lawrence Seaway and into the Great Lakes by the early 20th century. It bred prolifically, and then fishery managers brought in Pacific salmon species to control the population and provide anglers with a worthwhile sport fish. From the 1970’s on, this became the overwhelming pattern in the Great Lakes: millions of stocked chinook or king salmon and millions of alewives to feed them.

But a 2003 fish population survey in Lake Huron showed a troubling change: very few adult alewives. By the next year, they were virtually gone from the lake. Without their main food source, the salmon began to starve, and their numbers plummeted too.

Now experts are working to understand what has happened and is still happening in the lake, and planning for a future where the only sure thing is a sharp break with the past.

“In a very real way the system is driving itself, and we’re along for the ride,” said Dave Fielder, fisheries research biologist with the Michigan Department of Natural Resources.

Fielder said the collapse of Lake Huron’s alewives was likely caused by a combination of top-down and bottom-up effects: too many predators and too little food. Salmon stocking underestimated the number of chinooks breeding in the wild, resulting in a glut of alewife-hungry predators. At the same time, the alewife’s main food source, a small shrimp called Diporeia, collapsed, because two invasive species, zebra and quagga mussels, filtered the Diporeia’s food from the water. The invasive mussels locked (and continue to lock) nutrients at the bottom and edges of the lake, away from the deep water pelagic zone where the alewife lives.

“We kind of joked about it being the perfect storm,” said Fielder.

But the news is not all bad. Alewives are known for feeding on the fry, newly hatched young, of other fish in the lake. They are also high in an enzyme called thiaminase, which breaks down vitamin B1 in the fish that eat alewives. B1 deficiency leads to lower birth rates for these predator fish. In the absence of these negative pressures the walleye population in Lake Huron has exploded beyond all the expectations of those dedicated to its recovery, lake trout numbers are growing, and yellow perch is reproducing rapidly.

This leads to new challenges—but also new opportunities—for fisheries managers now the simple math of “more salmon equals a better fishery” no longer applies. The DNR is trying to weather the challenges and grasp the opportunities with revamped plans for fish stocking.Kurt Newman, Lake Huron basin coordinator with the DNR, described the process as a balance between protecting the ecosystem and satisfying fishermen, some of whom depend on the lake for their incomes. And all options are tempered by the economics of what a cash-strapped DNR can afford to do.

“The greatest challenge managers face is to integrate, in a sensible way, the science with society’s demands,” he said.

Beginning this fall, the DNR will stock about 85,000 brown trout in Lake Huron, only a third as many as in the past, but these fish will be larger (about 10 inches) and their size, along with the time of year (after the predatory cormorant migration) should ensure that more of these fish avoid being eaten before they mature.

120,000 steelhead (anadromous rainbow trout) are destined for Lake Huron in 2010. Half will be released as smolt (when they would naturally seek open water), while the remaining 60,000 will be held in net pens until they grow larger to protect them from predators.

Both steelhead and brown trout can find prey near the shore, an important feature in a lake where so much of the food is sequestered there, and, while they do not feed on the hated zebra mussel, they do hunt the mussel-eating goby.

The DNR is also taking a look at cisco, a 10- to 14-inch herring that is native to the Great Lakes, but was edged out of most of Lake Huron by the alewife. Cisco has the capacity to fill two niches: a fish that is easy to catch from the shore—the majority of anglers don’t fish from a boat—and food for the trout and other large fish that no longer have alewives on the menu.

Fielder recently completed a pilot study that concluded, yes, cisco can be raised and stocked, though they spawn in cold water at the end of the year, which makes collecting eggs difficult. It remains to be seen, though, if these fish can take hold in waters they haven’t occupied for years.

These population shifts, sudden booms, and the occasional head-scratching of those watching the whole process make it clear that the Lake Huron food web is redrawing itself, though along what lines, no one quite knows, and not without the help of the managers that carefully monitor and tweak the system.

Those who love the lake have a lot to get used to, like referring to salmon in the past tense and dropping line for walleye and trout instead of chinook, but the emerging order in Lake Huron is opening new doors and making what Newman calls “large scale management experiments” viable as the DNR juggles ecology, business and its own budget.

“I think Lake Huron’s the most exciting place in the Great Lakes to be working now because of all the change,” Newman said.

For more information on what is happening in Lake Huron, click here for explanation and analysis from the state of Michigan.

More on Fish News and Habitats