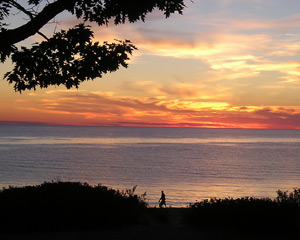 The pre-dawn air was cooler than I anticipated. I picked up my walking pace to generate some body heat just as the sun revealed itself over the grape fields to the east. It felt wonderful on my skin, and I stopped to take in the dark blue sky steadily lightening above the horizon. It was supposed to be a clear day, with scattered cumulous clouds appearing after noon. Until then the temperature would climb from near 48 degrees at daybreak to the low 70’s at two o’clock. Pretty standard for an early June day in Leelanau. This was the first in several trips each year when I forced myself to take the time to explore the area. I needed a break, and my college age daughter Jenny made me promise to take a few days and leave the hectic downstate world of Detroit. I hoped she was right. The job, now downsized and gone, was a high-pressure marketing and sales position that I grew to hate over the last five years as competition and lousy mergers wore me down. It was costly. My wife, Jeannie, grew estranged, and we had separated four months ago. We were both miserable, and the stress of my job tore at our relationship. We needed some time apart to “re-ground” ourselves, and I hoped and prayed this long weekend in Leelanau would begin that process for me. With a three-month severance, I tried to ignore the emotional and financial turmoil headed my way when the funds ran out. One thing was for sure, I was not going back to the big city rat race. I hoped this travel adventure into Leelanau would heal my mind and send me in a new direction professionally.

Jenny had worked the little harbor towns of Glen Arbor, Leland, and Suttons Bay over her college summers, and I would drive back and forth a few times each season to deliver mail, clothes or money as needed. But I never stopped to appreciate the beautiful scenery, solitude and water intrinsic to the peninsula. Now I was determined to learn about the “soul repairing” that Jenny claimed I could find here. She mapped out an itinerary that would allow me to experience the area. I had driven up to Traverse City last evening and parked the car in a long-term ramp near the hotel while I made my walking, cycling, and camping trip for four days. I hadn’t exercised much at all in the last years, driving around Detroit and managing 30 percent plane travel in between meetings. Fast food and dry, dusty hotel rooms were the standard fare. Regardless, it felt good to set out this morning at six o’clock and head north on foot along M-22 towards Suttons Bay, where I would rent a bicycle for the remainder of the adventure.

I resumed a five-mile-per-hour walking pace and felt good; the backpack fit well, and my shoes were the best I could find. Plenty of drinking water and fresh air … I was ready for anything. The sunrise continued to draw my attention. It began as a small burst of brilliant yellow light, grew whiter as the sun rose and changed the sky from a dark blue with a few stars still shining to a brighter clearer blue everywhere. The traffic was not a problem, mostly heading south into town and eerily similar to the recollections of Detroit except without the amount of cars, and the scenery was far more beautiful. I made Suttons Bay by 11:30 a.m. and picked up my ten-speed touring bike, grabbed a burger at Boone’s and headed up into the county’s high center forests. Once off the waters of West Bay the traffic vanished, and I was alone, pedaling through forest areas, vineyards, fruit orchards and farmers fields turned over for fresh plantings. The wildlife paid me no mind as deer, turkeys and fox carried on with their natural routines and offered me no more than an occasional stare. There was something calming and comforting at the same time as I let myself become part of the land and nature. It felt wonderful.

At two o’clock I stopped on a high plateau and gazed over West Bay, Mission Point and the distant shore of East Bay. Despite the intense physical activity my heart rate was rapid but not too fast, my head was clear and all my senses taking in every nuance of my surroundings. For an instant I thought … this must be what Jenny meant. Then my logical mind took control again and dismissed the thought as fantasy. I was simply exercising as I hadn’t for years, and the endorphins were kicking in. I headed north-northwest staying on the high, forested rolling hills of fruit orchards. By 5:45 p.m. I arrived at a high bluff overlooking south Lake Leelanau, where I followed a two-track dirt road cutting through rows of tall pines until I was directly over the east edge of the lake. I decided to pitch my nylon tent and build a small fire. Bands of chevron clouds were gathering near the western horizon, and the water began to sparkle with motion. I found my thoughts settling in on the approaching sunset and less on my troubles. The chores of my campsite were a nice diversion from marketing reports.

The bacon and egg sandwich came off the fire in a pan no larger than a small Frisbee, but it was very satisfying when combined with a hot cup of coffee and a cherry-walnut Chum Bucca oatmeal cookie. I lay on my sleeping bag for over an hour and saw the sunset performance begin. Half asleep I began to float between daydreaming and a deep REM sleep. I was not tired really, just well exercised, and totally relaxed. Without realizing it I drifted off to a deep sleep and had vivid images of swimming frantically, lost in Lake Michigan and reaching for something. Thirty minutes later I woke suddenly, the dream lost, and the sunset approaching fast. The eerie dream was intense but without any relevance, as some dreams are, so I decided it was the over-stimulation of my trip.

The orange orb took about eight minutes to fully submerge into the dark green tree line to the west. The sky intensified with yellow, melting to oranges and finally to soft red colors as the sun disappeared. The low scattered layered clouds continued to reflect the residual light for over an hour. I watched the sky submit to darkness through the screen opening on my tent and let the final warm rays relax me. I zipped close the nylon cover over the tent screen and snuggled in my sleeping bag. Just before I rolled over and closed my eyes for the last time the dream returned for an instant then switched to images of my daughter. I wished she were with me.