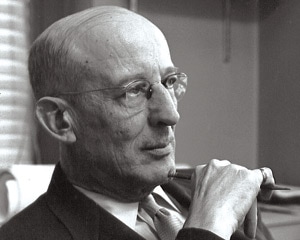 Bruce Catton was once asked how he could describe Civil War battles with such freshness, accuracy and power. “I don’t know,” replied Catton. “Maybe I was there.”

He wasn’t, of course: Catton was born more than three decades after the War Between the States. Yet this son of Northern Michigan grew up around a handful of veterans who enjoyed telling tales from the conflict. “By the time I knew them most of them had long gray beards,” wrote Catton many years later, when he could have grown his own gray beard. “Those terrible names out of the history books—Gettysburg, Shiloh, Stone’s River, Cold Harbor—came alive through these men. They had been there.”

The old men who dusted off their blue uniforms for Decoration Day soon went to their patriot graves. Yet their stories didn’t die with them. Catton carried their legacy forward in a series of books known for their meticulous research and narrative flair. Volumes such as A Stillness at Appomattox and The American Heritage Picture History of the Civil War helped Catton establish a legacy of his own—as one of the most influential historians of the 20th century.

Catton was born in Petoskey in 1899, the same year as Ernest Hemingway, another writer whose boyhood in Northern Michigan would shape his career. Whereas Hemingway was mostly a summer visitor to Walloon Lake and its environs, Catton was a native of the region. He grew up in what he called a “frost-bitten village,” along the shores of Crystal Lake. “The name of this town was Benzonia, and when we tried to tell strangers about it we usually had trouble because most people refused to believe that there was any such word,” he once wrote. According to legend, the name was a blend of Greek and Latin and it meant “good air.” Catton wasn’t sure about that, but knew that names have a way of evolving over time, as what was once La Riviere aux Bec Scies morphed into the Betsie River. So he didn’t fuss over Benzonia’s etymology: “The air was good there, and there was no harm in saying so.”

Religion was in the air as well. “Growing up in Benzonia was just a bit like growing up with the Twelve Apostles for next-door neighbors. You could never forget what you were here for,” recalled Catton. His father was a Congregationalist minister who taught at Benzonia Academy, a preparatory school, and later became its headmaster. The Cattons lived in a school building that still stands today as the Mills Community House. By the time it was built in 1909, lumberjacks had depleted Michigan’s forests so thoroughly that it was put up with pine imported from Georgia. The Benzonia Public Library, which includes a “Catton Room,” now occupies its first floor.

At the academy, Catton stumbled through Latin and hated geometry—and found that the study of history fired his imagination. He read about the Spanish conquistadors and the moundbuilding cultures of North America. He even tried his hand at writing a novel about a Mesoamerican king. “I realized after a time that I was not up to a novel,” he wrote many years later. “And anyway how could you do a piece of fiction whose hero is named Nezahualcoyotl? Utterly impossible.”

Catton didn’t merely encounter history in books, but also from the accounts of Benzonia residents who had witnessed it. Elihu Linkletter had lost his left arm at the Battle of the Wilderness in Virginia and went on to become a gun-toting birdwatcher who waged a one-armed war against Michigan’s squirrel population. Lyman Judson rode with the cavalry under General Philip Sheridan and had a horse shot from under him. The hard fall left him with severe back pain. During Catton’s boyhood, however, Judson slipped on ice, banged his spine again, and suddenly was cured. John Morrow recalled the time General William Tecumseh Sherman yelled at him in “language that would make a mule driver blush.” Another veteran told Catton that Benzonia’s village cemetery resembled a famous one in Pennsylvania: “it looked out over the rolling countryside just as the Gettysburg cemetery does, and the main road that came up from the south went past the base of the hill much like the Emmitsburg road that Pickett’s men had to cross.”

Years later, Catton really did write a novel. Banners at Shenandoah is about a boy who runs away from home in Northern Michigan, joins the Union army, and, like Judson, serves under “Fighting Phil” Sheridan. The opening pages are plainly autobiographical, with their descriptions of schooners on Lake Michigan and big snowdrifts perfect for tunneling. “Altogether I liked our little town,” says the book’s first-person narrator. “Yet somehow I always wanted to get away.”

Catton himself got away in 1916. He attended Oberlin College in Ohio but never finished his degree. Instead, he served briefly in the Navy and started a family. Professionally, Catton worked as a newspaper reporter. When the Second World War broke out, Catton was a syndicated columnist in Washington, D.C. Then he became director of information for the War Production Board, a civilian agency that regulated manufacturing and rationed materials. From this experience, Catton wrote his first book, The War Lords of Washington. It came out in 1948, making him a late-bloomer as an author: He was a year away from his 50th birthday.

The middle-aged Catton then made the daring decision to become a full-time book writer, turning his passion for the Civil War into his occupation. Ruth Catton, a niece who lives in Benzonia, remembers family trips to visit her uncle in Washington. “He and my father would go to as many battlefields as they could,” she says. In 1951, Doubleday published Mr. Lincoln’s Army, the first volume in what would become a trilogy about the Army of the Potomac. In the next volume, Glory Road, Catton praised “the stand-up valor of the private

soldier.” His readers began to appreciate that he was doing something different from earlier Civil War historians: The heroes of his books weren’t so much the generals and men of rank who issued orders, but the grunts who did most of the actual fighting. Catton relied heavily on their thoughts and observations, drawn from regimental histories and other sources. He approached his research like a good journalist: He took careful notes, made sound judgments, and relished in the discovery of colorful quotes and details. He also embodied a kind of Midwestern nationalism that endorsed the war’s outcome but was willing to give Southerners their due. Catton, for instance, made no effort to hide his admiration of Confederate general Robert E. Lee.

History professors often disparage writers who lack academic credentials, but they couldn’t ignore the quality of Catton’s work. “He liked to compare himself, untrained and learning on the job, to the so-called ‘political generals’ of the Civil War,” recalls his son, William, a retired history professor who lives in Lancaster, Pennsylvania. In one of his books, Catton penned a revealing passage about Abraham Lincoln: “It would seem odd to find this untaught civilian lecturing professional soldiers on the elementary points of tactics except for the fact that many of the professionals obviously needed lecturing by somebody.”

Similarly, Catton could have given lessons to professors on how history ought to be written—not in dry academic tomes full of impenetrable jargon, but in beautiful narrative prose that tells an accurate and compelling story. Eventually, the elder Catton earned so many honorary degrees from colleges and universities that one of his assistants took the cowls and turned them into a patchwork quilt. In 1977, President Gerald Ford awarded him a Presidential Medal of Freedom. “He made us hear the sounds of battle and cherish peace,” said Ford.

As a young man, Catton may have wanted to get away from Benzonia. Yet he kept coming back. “He took my mother there shortly after they were married, and she promptly fell in love with the area,” William says. He liked to fish, play double solitaire, and catch up with childhood friends who had never left. There were family excursions to nearby Frankfort, to watch the comings and goings of ferries and trains. Catton whittled wood, too: he carved animal figures from Winnie-the-Pooh and The Wind in the Willows for his son, and later created dioramas featuring Civil War soldiers. Some of these are on display at the Benzie Area Historical Museum, in Benzonia.

“During the thirties, we rented cottages on Crystal Lake for two weeks or more almost every year,” says William. The visits would have been longer, but Catton always needed to get back to a desk in a faraway city. Then, in 1954, he “hit the jackpot,” as his son puts it. A Stillness at Appomattox, the final volume in the Army of the Potomac trilogy, won the Pulitzer Prize and the National Book Award. Civil War buffs continue to recognize it as one of the finest books ever written on their favorite subject. David McCullough, the author of Truman, 1776, John Adams and other bestsellers, has described his own experience of reading it as a senior at Yale: “I think it changed my life. I didn’t know that then, naturally. All I knew was that I had found in that book a kind of splendor I had not experienced before, and it started me on a new path.”

A Stillness at Appomattox was not merely a critical success, but also a commercial one with lifestyle implications. “From then on it was possible to start looking for a place to buy and spend whole summers in, as he had longed to do for decades,” says William. “My parents purchased a house on a bluff overlooking Crystal Lake. On a clear day, from his big living room picture window, you could see Lake Michigan, the Empire Bluffs, Sleeping Bear Point, the Manitous, and very nearly forever.” After that, he split his time between an apartment on the upper east side of Manhattan and the home he called Sumac Hill. A rambling, unpaved road led to the property. As a tribute, Benzie County named it Glory Road.

Despite the change in scenery, Catton continued to peck away at his typewriter. He wrote another trilogy to commemorate the Civil War’s centennial and completed the last two books of a three-volume biography of Ulysses S. Grant (another writer had died after finishing the first one).

Waiting for the Morning Train, a 1972 memoir of his boyhood, is in many ways Catton’s finest—a rich account of local history, a fond reminiscence of a bygone era, and thoughts both elegant and elegiac on the problems of resource scarcity and technological progress. Catton believed it didn’t receive enough attention: “He remarked once that if the book had been set in, say, New England, or in the right part of upstate New York, Eastern reviewers and readers would have been all over it; but Northern Michigan was too remote—not sufficiently ‘in,’” wrote his son in the foreword to a posthumous edition.

That may be, but Waiting for the Morning Train remains a favorite among Catton’s fans, especially those with roots in Michigan. In it, trains become metaphors for life and death, and Catton describes the appearance of the night train: “There is the headlight, shining far down the track, glinting off the steel rails that, like all parallel lines, will meet in infinity, which is after all where this train is going.”

For Catton, the night train to infinity came a few years later, in the summer of 1978, when he was at his home overlooking Crystal Lake. He was buried in Benzonia’s township cemetery—the one resembling Gettysburg’s, and alongside many of the Civil War veterans he knew as a boy and to whom he gave his own last full measure of devotion.

John J. Miller is a writer for National Review and the author of A Gift of Freedom.