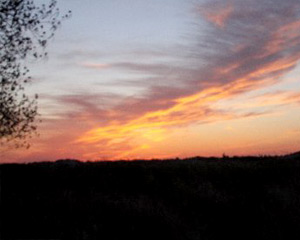 Somedays you are rewarded. Today was one of them. The alarm went off way too early but I looked out the window to see an awesome sunrise. So I grab my camera and keys. I am dressed in my pajamas and bare feet and head up to the sand dune. On the way up the dune to capture the sunrise I hear a hissing grunting noise from the dune grass, which scared the crap out of me. I am really getting tired of things I cannot see grunting and hissing at me. I was bare foot and who knows what would have come out of the grass and bitten me. I was brave; my heart was racing a 100 miles an hour, but I charged on. I snapped about 12 pictures only to realize later while on my early morning walk that the camera was on manual focus instead of auto, and I did no focusing at all. So when you see the picture of the sunrise it is blurry but you will get a general idea.

I then get online to send yesterdays diary and my husband Ric is up and instant messaging me, when I asked him what he was doing up at 6 a.m. he said he had been up since 4:30. So we chatted, and then I called him when I was off line.

The wind is still roaring out of the south. It was not until evening that the flags were not flying straight out. We had sunny weather all day until about 5 p.m. when the wind started to shift and blow out of the north, with storm clouds appearing from the south. More of the beach has been eroded away. It is amazing what has happened to the beach in four days.

One of our jobs today was to put price tags on some lighthouse Christmas ornaments. This is the first time since I have been here that we have done any of this, a far cry from last year. Just as we got the boxes out we had several visitors arrive. We had a family from Germany who came to Ludington to pick up their son whom had been a foreign exchange student at the Ludington High School. He was graduating this weekend and they wanted to be there for him.

My surprise of the day was my son Ric II, his girlfriend Narissa and the 2 dogs Deuce and Jones hiked out to see me. I have been at the lighthouse six years, and he has never visited. We visited a while, climbed the tower, played with the dogs, and then it was time to say good-bye. Ric II leaves for Alaska for a fishing guide job on Sunday.

We had a family with three small children arrive. The two oldest were tall enough to climb the tower so Sharon held the 1-year-old while the parent took the kids to the top of the tower. They were the cutest kids.

Jack has been a keeper at the lighthouse for seven years and has climbed the tower 779 times so far. I think a pretty impressive goal. He likes to climb at least 100 times a year.

It was my night to cook. I had invited Dave (vice president of the board) out to dinner tonight. Everyone else had other plans so for a minute I thought it was just going to be him and me until the North Breakwater (LNBL) keepers came back out to make more purchases for family members. They could smell dinner cooking in the oven and asked what we were having for dinner. I told them Lasagna, and would you like to stay. After some convincing they agreed to stay. Dave and I did have a chance to visit about board stuff before the LNBL keepers came back after dropping off some stuff to the house they were staying in. It was good visit and getting to know them better was a bonus. Dave brought a CD that his cousin had recorded in 1955 of the Big Sable and North Breakwater Light fog signals going off. We also heard the Badger Car Ferry coming into port and heard them taking the trains off the ferry. It was very interesting to hear these sound that are not heard anymore.

?In 1949, the Coast Guard proposed to electrify and partially automate the light station. The electrification project involved providing electricity from a diesel generator to the tower and dwelling. The Kerosene I.O.V. lamp was removed and a 500-watt bulb and lens combination produced 20,000 candlepower and was visible for 19 miles.

In 1953, The Mason County power lines were extended to the lighthouse site, supplying the light station tower and dwelling, and eliminating the need for local diesel generation. At the same time, an auxiliary electrical generator was added within the tower as a backup in the event of a power failure. The 500-watt electric light bulb was removed and replaced with a 1,000-watt electric light bulb with a back up bulb that could be automatically activated if the first bulb burned out. The 1000-watt bulb and lens combination produced 50,000 candlepower. However, the light could still be seen for only 19 miles due to the curvature of the earth.

When everyone returned to the lighthouse we played yet another new card game. Which means: I am once again writing this late at night. During the card game someone looked out the window and saw a sliver of a sunset to the north. We were not expecting a sunset, as the sky was full of rain clouds. So I was able to capture one shot that was semi clear of that.

Another great day: A sunrise, a visit from my son, meeting some great people, and a great sunset.