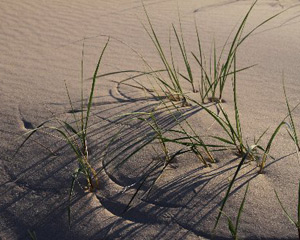 I really was not ready for the alarm to go off at 6 AM today. I am really quite tired this morning. It looks like it will be another sunny day, which it was all day. It was extremely windy with a warm wind out of the south. I wrote this diary and then when back to bed and read some of my book. At 8 a.m. I decided a walk on the beach would be better for me. There was not much going on this morning. We had no school kids coming so we were not really in a big rush.

I was supposed to have this morning off, but I had asked my fellow keepers if they minded if I took this afternoon off instead. We pretty much visited all morning.

The new keepers for the Ludington North Breakwater Lighthouse came out to visit us, extremely nice people from Missouri. They took advantage of our 60% off table of sweatshirts. We had a German exchange student who visited and was returning to her homeland tomorrow. She said it was scary at the top of the tower with the wind blowing so hard.

I had a very relaxing afternoon. I ran some errands in town. Purchased some Christmas presents. Talked with my husband Ric on the phone, drove around the boat launch while talking to Ric to see if he could see me on the live Harbor Cam, we determined it wasn’t as live as we thought. Then I went back out to the State Park and was going to hike on one of the trails. I got my camera out and realized that I had left the battery plugged in back at the lighthouse. Glad I had my back up camera. My primary goal on the trail was to see if the swan had her babies yet. She had not. While walking on the trail I don’t know who startled whom first, but this big old raccoon met me on the trail. Then I decided to find a quiet park bench and finish book #1. What a relaxing afternoon.

I returned to the lighthouse just before closing. Jim and Sharon went out to dinner with friends. It was Bruce and Joan’s night to cook. I cook tomorrow night. When the dishes were done I headed back outside for a long walk on the beach. I was out for about an hour just enjoying the lake and its surrounding.

I then was invited to play cards, Hearts, I don’t usually play cards but they taught me. Did not win but who cares.  I am so enjoying the keepers I am with. It seems as though all we do is joke around and laugh.

These lessons are taken from the Thomas Tag book that is given to new keepers before they arrive for their tour as a keeper.

The keepers of most life saving stations reported that the majority of shipwrecks occurred when ships were caught by a sudden violent storm and were making a mad dash for the nearest harbor. The ship captains were often forced to make for harbors they were not familiar with, and often crashed into the breakwaters or were driven ashore as they were trying to avoid the storm. Simple accidents, human error and mechanical failures caused other shipwrecks.

In March of 1879, Edith Morgan, the 21-year-old-daughter of Big Sable Point Life Saving Station keeper was at home with her family. The station was not yet open for the season but her father saw three men  far out into the lake who were hanging onto a capsized boat. The lifeboat could not be launched because debris and ice on the beach blocked the way. Keeper Morgan  and his two sons and daughter used a small fishing boat to attempt a rescue. Edith and the older brother manned the oars, her younger brother manned the rudder and her father rowed and prepared the ropes and life rings to use in the rescue. They fought their way through the icy surf and were able to rescue the three men and return to the station. In the fall when the storms occur, the lighthouse keeper would sit in the tower and watch out the window for ships in distress. If he saw someone in distress he would send his child running down the beach a mile to inform the life saving station of the need for a rescue.

I wish I had more excited happenings to tell you about. I love being at the lighthouse this time of year because you are not so busy that you have time to visit with all the visitors to the lighthouse.

It is late because I played cards too long.