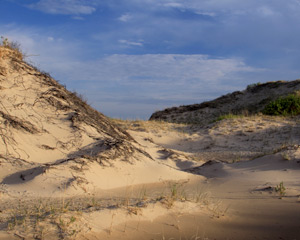 What an incredible, busy weekend I had.

Saturday: Was as busy as busy could be in the lighthouse. It was sunny and the state park was full. I took absolutely no pictures. No time. We gave 200 tower tours and sold $1,700 in merchandise in the gift shop. Of course a table of 60 percent–off sweatshirts helped with the sales. Even though it was sunny there was a cool breeze from the north. There were several fishing boats out in the water. Big Sable Point is a popular fishing spot. One gentleman asked me if our clocks were wrong. I told him no, why? He said his cell phone showed the time to be an hour earlier; I informed him that he was picking up a signal from Wisconsin. My plan this day was to go out to the cabin and see my husband, Ric; I had not seen him in 10 days, so thought I would reacquaint myself with him. So my fellow keepers let me leave as soon as we locked the door at the end of the day. Ric had a nice anniversary dinner prepared for me. We spent a very nice evening together. Up early, had to be back at the lighthouse on Sunday morning.

Sunday: Was busier than Saturday at the lighthouse. We had 300 people climb the tower, and made $2,200 in the gift shop. It was sunny and we continued with the cool wind from the north. The visitors kept coming. I would greet on this day, a Lansing firefighter that I knew, two people who worked at the same hospital I do, a friend of my son’s sister-in- law, her two children and her mother, and a highlight was seeing my friend Marnie, (Marnie is the oldest of the “three sisters.” The three sisters’ mother used to bring them out to the lighthouse in the summers and told them she wished she could live in the lighthouse. Their mother is no longer with them, but they still hold the lighthouse near and dear to their hearts.) Marnie brought her two daughters Mallory and Madelyn with her along with a good friend. We are so busy but I took time to visit anyway. Thank goodness we had as many keepers working as we did. I thought I had said my good-byes to Marnie, but then she comes in with her foot all bloody. She had fallen, so we had to get her cleaned up.

I did my turn at the top of the tower, during that time, we had a women arrive at the top of the tower sobbing and shaking. She was very scared of heights. Her husband was going to talk her down the stairs but their 3 year old was scared and screaming at the top of her lungs. I sent him on with the child, and then I tried to get someone’s attention at the bottom of the tower not to let anyone up until I could talk these women down. We cannot leave the tower when there are still visitors walking around the outside of the tower. Just then a gentleman said he could help her; he was a retired military aviator and now a registered nurse so he helped her down the 130 stairs. I thanked him profusely and gave him a bottle of water as a thank you.

The sweatshirts are still selling well. In fact we sold all of the adult sweatshirts on Sunday.

I had briefly gone outside and smelled smoke. I looked all around the building and discovered a family was building a fire at the keeper’s fire pit north of the lighthouse. Which is fine, but I did question their thought process. The wind is out of the north and sparks could fly at our house, which is 142 years old. The worse part about this story is that when the people left they did not put the fire out completely and a spark caught one of the old wooden benches on fire, totally destroying the end of the bench.

The best part of Sunday was attending my grandson Harrison’s first birthday party. His Nanna Young was kind enough to host everyone at her house in Ludington for the party. Thank you Nanna. Harrison’s mom, Kari, spent four hours decorating a train-theme cake. If her day job does not work out maybe she could do theme cakes for people. Harrison was in his usual happy go lucky self. He really enjoyed eating his birthday cake. He was probably up all night from a sugar buzz. Of course he received LOTS of birthday presents.

I returned to the cabin to spend another evening with Ric.

Monday, my 35th wedding anniversary and Memorial Day. Happy anniversary Ric, and thank you to all those who gave their lives protecting our country.

Up early again to return to the lighthouse. I am not anticipating as busy of a day. We had a steady stream of people this morning and then it tapered off as the day went on.

We did receive a panic phone call from the Little Sable keepers; they could not get the lock unlocked at the LSP tower. Sometimes sand gets into the lock and makes it difficult to get it open. Eventually we got them some help, and they were back in business.

We had visitors today from Czech Republic, Scotland, Germany and England.

Our newly elected board member stopped out for a visit today. He cannot make the next board meeting and just wanted to visit and get to know how we do things.

Today was Jim and Sharon’s day off, they left last night for their cabin in Pentwater and returned around 8 p.m. with kayaks on top of their car; my day off is tomorrow. Not sure what I am going to do, but I will find something. I think a trip down the shoreline to Little Sable might be in the works. I do have to go to the library and work on some lighthouse board stuff. Probably a hike in the state park, who knows, I might even get on the bike. I have all day so time is not an issue.