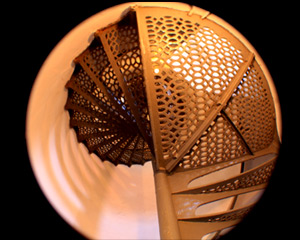 I awakened to rain. It is my day off; I have several things I would like to do. So I was hoping the rain would stop. It did not. So, all my plans were soaked up in the sand. No bicycle ride, no hiking, no trip to Little Sable, and no picture taking. I took a total of 11 pictures today, four of a very wet duck in which the water was running right off his back, three of the Ludington North Breakwater Light, it was raining so hard you could hardly see it, and four of a goose with her goslings. That was it.

Since it was my day off I was not in a really big hurry to do anything. I went back to bed and read after sending off my blog; Elaine and Jack were up and out early to go to the grocery store. Joan, who is not a morning person, was in a fog and is best left alone until she gets at least one cup of coffee into her.

We were to have a school group from Pentwater visit today, but they canceled due to the weather. I think Jack was disappointed as he likes to play tricks on the kids. His favorite is asking the school kids if they purchased a one-way or a roundtrip ticket to the top of the tower. He would tell them if they only got a one-way ticket that they could purchase another at the top of the tower.

The rain continued. I did have to go to the library today and print off some documents to send in the board packets for the upcoming board meeting. Not thinking I would have to make an appointment, fortunately for me there was an open one. They name their computer stations after nautical themes. I was assigned the Harbor station. After 10 days of dial-up you have no idea how wonderful high-speed was. Then it was on to the print shop and then the post office to mail the packets.

I really had not much else to do. I made a trip to Meijer’s for some supplies, wasted time there. The movie theater was not open, so going to a movie was out. I had shopped downtown Ludington last week so that was out. So I drank. Not a lot, I went to Michael’s and had a Bloody Mary with my very late lunch. The rain is coming down like cats and dogs, still. So I decided to go back to the state park and was going to read while sitting in the car at the Hamlin Lake Beach. The rain let up, so I decided I would be more comfortable back at the lighthouse, plus a nap sounded really good.

The first major shore erosion affecting the station began in November 1941 and continued over the next two years. The late fall storms in 1941 brought the lake up to and eventually past the fog-signal building of 1908. The sequence of events leading to the destruction of the original fog-signal and the building of the new fog-signal were recorded in the keeper’s log as follows:

As you see, it was a most uneventful day. We had zero visitors to the lighthouse. Jim and Sharon had some friends visit this morning, no official visitors. Hopefully we will have more business tomorrow. If not I will have to start telling ghost stories. To those of you who do not remember, we do have a ghost that will play games with us.

While we were sitting and reading tonight, I heard this plane fly over. Got up to look and see if it was the Coast Guard but it was a very low flying plane.

Jim and Sharon (whom were on a walk) said it was a 1950 twin-engine passenger plane, and that from where they stood it looked like it was going to hit the tower. That would have put us right out of business.