Cleaning House at the DeYoung Farm 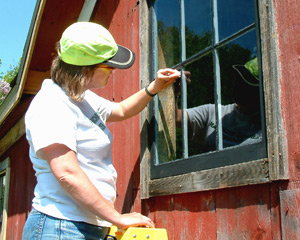 A narrow stream runs through the DeYoung Farm in Traverse City, like it has for nearly 150 years, since a DeYoung ancestor diverted the little river at the back of his property, forcing it to take a detour on its way to Cedar Lake. The stream ambles through fields and outbuildings, near the farmhouse and out into wetlands that feed the lake. To look at it, you would never guess that this little stram has watered cherry trees, some of the first in the Leelanau area, satisfied the thirst of people and livestock, and powered both farm tools and electric lights.

But this unassuming stream is an integral part of the history of this place, a history that added a new, very different chapter this June when the DeYoung farm played host to a group of conservationists, historians and volunteers, all working to preserve the historic site.

Graduate students mingled with Youth Corps workers in white Tyvek suits—to protect them from extreme dust and mold. Members of local historical societies inspected the site, accompanied by local farmers and other curious neighbors who remember it as a working farm.

The 145-acre farm sits on the west side of Cedar Lake, just a few minutes away from the traffic and bustle of downtown Traverse City. The faded, yellow farmhouse slumps a bit, just a few yards from Cherry Bend Road, and the barn, powerhouse and other outbuildings show their age with faded paint, broken windows and subtle twists to their structures.

The Leelanau Conservancy headed up the preservation efforts, along with students and faculty from the Historical Preservation graduate program at Eastern Michigan University.

Jenee Rowe, stewardship director of the Leelanau Conservancy, was at the site Friday, June 5, the last day of the project, a floppy-brimmed hat on her head and a wide smile on her face. The project is the culmination of years of work on the part of the conservancy: buying the land, making connections with EMU, planning the week’s work; but is only the beginning of what they hope to accomplish at the farm, she said.

Rowe was the face of the conservancy at the site, but she also organized the work of the SEEDS Northwest Michigan Youth Corps, a group of high school students that hauled bundles of brush, slowly filled a long construction Dumpster outside the house with moldy drywall and generally cleaned or removed anything standing in the way of restoration work.

EMU’s Historical Preservation graduate program is the largest in the United States. The DeYoung farm was the site of the program’s annual Field School, a week encouraging graduate students to get their hands dirty in a very real way while building, scraping, painting and cataloging for course credit. This was the first Field School hosted by the DeYoung Farm, but there is still plenty of work to do and the conservancy hopes to bring the program back in upcoming years.

Photo(s) by photo by Nathan Harris