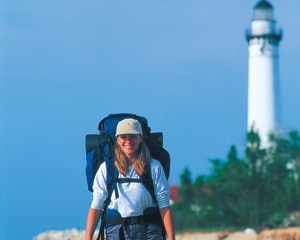 For more than a century the elegant South Manitou Island Lighthouse guided ships over the treacherous Manitou Passage beside Michigan’s Sleeping Bear Dunes. Decommissioned in 1958, it spent the next 50 years as a mute and lightless memorial to the heyday of Great Lakes sailing ships. But the historic lighthouse is about to enter into a second career.

On May 30, its lamp will be relit to shine once again.

“Thanks to our generous supporters, the South Manitou light will shine on the horizon from May through October,” said Dusty Schultz, superintendent of the Sleeping Bear Dunes National Lakeshore, which administers the lighthouse and the island where it stands.

One of the most scenic lighthouses in the country, the 104-foot lighthouse was established in 1839 to mark the crescent-shaped bay at South Manitou, the only natural harbor along the eastern coast of Lake Michigan. It was strategically located on the heavily trafficked Manitou Passage, which was used by cost-conscious skippers on the 300-mile eastern route from Chicago to Mackinac Island. Schooners took refuge here during storms, and steamers stopped to take on wood for their boilers. The current tower dates from 1871.

Abandoned after its decommissioning, the lighthouse became a favorite attraction for day hikers and campers after the 1972 creation of the Sleeping Bear Dunes National Lakeshore, which includes the two Manitou Islands. Today, almost 9,000 people take the ferryboat ride to South Manitou each summer, where they camp, climb to the top of the tower, explore the small village around the docks with its old post office (now a historical museum). Some hike to the rusting hulk of the freighter Francisco Morazan, which ran aground on the island in 1960, or snorkel around the wooden wreck of the lumber ship Three Brothers, which sank in 1911.

But the idea of relighting the beacon remained a popular dream for local residents and members of the National Park Service, and was finally realized in late 2008 thanks to a partnership with the Manitou Island Memorial Society (a group that includes the descendents of former island residents) and Manitou Island Transit (which operates the ferry service from the mainland).

During the 2008 summer season, Park Service maintenance workers restored the tower’s lantern room and spiral stairway of the tower. A replica of the light’s original third-order Fresnel lens was created by Artworks Florida and powered by a special low-wattage bulb designed by Electro-Optics Technology of nearby Traverse City. The lens and light were installed in late fall (at a cost of $93,000) but the installation came too late in the year for a formal dedication ceremony.

For the May 30 program, Schultz and her staff have prepared a special after-dark presentation at the park’s maritime museum in Glen Haven that begins with a 9 p.m. interpretive talk about the history of the Manitou Passage and the shipwrecks that made the lighthouse necessary. As the sun sets and darkness falls over the water, the light will be officially “switched on.”

The Maritime Museum (a former U.S. Lifesaving Service station) is located at Sleeping Bear Point on Glen Haven Road one half mile west of the Cannery in Glen Haven, a historic village located three miles west of Glen Arbor. For more information on Sleeping Bear Dunes National Lakeshore, visit the park’s website at nps.gov/slbe or call 231-326-5134.

Read on to find out about two more maritime events happening this summer and get an inside guide to the Sleeping Bear Dunes.