Orchids in our Midst 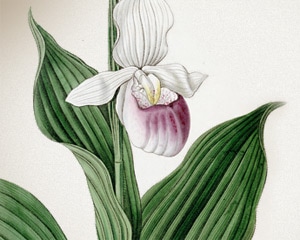 Until a few summers ago, I had never seen an orchid in the wild. I’d envied the showy blooms pinned to other girls’ prom dresses. I’d looked at orchids in vases: white blossoms just opening on their slender stalk and looking for all the world like a confection on a stick. But I’d never ever stumbled on an orchid plant in a natural context. Living on its own terms.

But on this one afternoon driving on the tip of the Leelanau Peninsula with my grandmother, on our way for an ice cream cone in Northport, she casually remarked she knew of a spot where we could see some orchids. She slowed down the car and parked, and we stepped into a place where the hemlocks parted.

We only had to walk a few feet before we saw them popping out of the ferns: a colony of pink lady’s slippers. The pouchlike blooms struck me, demure and dainty shoes dangling lazily above the forest floor. The pink lady’s slipper is considered a common Northern Michigan flower—but this wasn’t a common moment. This was an event.

Charles Darwin called orchids as varied and almost as perfect as any of the most beautiful adaptations in the animal kingdom. Orchids were his darlings. He had greenhouses built on his property for botanical research. And so captivated by their remarkable schemes of deceptions and seduction, he wrote On the Various Contrivances by which British and Foreign Orchids Are Fertilised by Insects three years after his more famous book on evolution.

An evolutionary path spanning millions of years gave rise to the relationship between the orchids’ petal designs and the moths and bees that are drawn to them. To attract a specific pollinator, each orchid species adapted its own beautiful, bizarre variation on a basic three-petal, three-sepal theme. It’s hard not to interpret the sculptural quality of their blooms: This one looks like a bee, like a spider, like a clown’s nose, like a magnificent tropical bird. And it’s all in the name of seduction. One species looks and feels like a female bee to trick males into thinking they’re mating, when they’re actually pollinating. Some orchids lure bugs into mazes—with the only way out leading them right past the pollen. Another orchid’s gaudy lower lip juts out to become an attractive landing platform for butterflies. Still others draw their pollinator with scent—one orchid actually smells of carrion flesh to attract flies.

The idea is that the bee or butterfly will then deposit a pollen bundle on another orchid, so the flower may begin to produce massive amounts of seeds. Orchid seeds are the smallest of any flowering plant—microscopic dust, really—and are so light that they can be carried for miles by air drafts. The thousands of seeds in a single pod almost seem like overkill (Darwin hypothesized that if all the seeds were able to germinate we would be knee-deep in orchids throughout the continents), but it’s a matter of survival. An orchid seed—containing no food supplies of its own—will only grow if invaded by a soil fungus called mycorrhiza. The fungus lives inside the seed, supplying minerals and nutrients until the plant can produce food of its own. Only a few seeds are fortunate enough to fall in a spot where that fungus lives.

As with all symbiotic creatures, this mutual gift of life between fungus and flower demands a delicate balance.

Yet modern science allows us to grow orchids, to contrive the fungal relationship in a flask in a way that was once believed impossible for humans to simulate. Now for the everyday botanist, hardy European or exotic orchid varieties are relatively simple, beautiful and fascinating to cultivate. Michigan species remain an enigma. They are too difficult and costly to propagate from seed, and chances are a seedling would never make it in a backyard—if a habitat changes in any subtle way, the plant may perish.

That’s why poachers’ misguided attempts to remove orchids from a native habitat and cultivate them in their own yards or in pots can be a dismal, tragic failure.

So there remains something intrinsically captivating about seeing them in the wild—the difference between gorillas in the mist and gorillas in the zoo.Up North, you still have opportunity to find orchids living on their own. Many of Michigan’s 58 native orchids find our region’s bogs, wet woods and meadows ideal. Some of our native orchids, like the calypso or yellow fringed orchid, are threatened. Many in the region are rare because of illegal harvesting and development.

It’s a small thrill to know that a speck of microscopic orchid dust can land in our midst and find all around it what it needs to become a lady’s slipper. That marvel seems reason enough to hold that habitat near, to keep orchid turf from being destroyed, unwittingly or otherwise. I realized it standing in the in the woods near Northport, the musk of wet earth in my nose, just the right amount of sun leaking through the hemlocks above me, and the sea of lady’s slippers before me: Context, indeed, is everything.

Find out more about wild orchids in Northern Michigan.