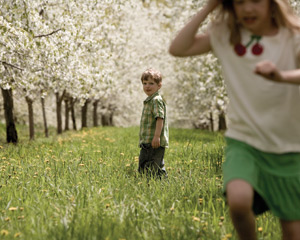 These young talents run some of the North’s most thriving cherry farms. So what does it take for the next generation to get their piece of the pie?

The enticing scent of cherry coffeecake baking inside the darling red farm market off coastal highway U.S. 31 in Ellsworth is a nice foil to the cool, gentle rain outside. Erin Veliquette, Royal Farms’ in-house baker who trained for five years in Denmark, adds a little Euro flair to the classic Midwestern pies and pastries the market sells alongside fresh-picked and dried fruit and bottled cherry juice.

While Royal Farms owner Sara McGuire, 35, meets with a bride about a wedding cake, her husband Patrick McGuire, 38, lanky and already tan in May, jumps in his truck to go check some of their in-bloom orchards for damage. As he maneuvers down the muddy ruts, bottles of Water Babies sunscreen and Aleve vibrating on the dash, Pat explains he’s not concerned about today’s rain, even though bees—pollination’s magic wands—don’t fly in the rain. Unlike the sweet cherries, which need bees to make them bear fruit, the tart cherries, in bloom now, are self-pollinators. And thankfully, when the sweets were in bloom last week, it was sunny. The bees were busy.

His concern is a fluke cold spell over the weekend and what it did to the cherry blossoms’ tiny pistils—what his nine-year old daughter, Emma, calls the “baby cherries.” That blossom is dead, he says, pulling apart the pale petals to reveal a browned pistil. Blossom days, the scenic glory of spring in fruit country, are touch-and-go time for Pat. “It’s like worrying about a mother who’s pregnant with a child, only there’s 10 million of them,” he says. He jostles the truck over to another orchard to check on his crew, who are wrapping white tree-guard around the base of the newly transplanted trees to keep mice, rabbits and deer from eating their tender leggy trunks.

Pat was working at General Motors in Pontiac in a corporate office when he proposed to Sara, his girlfriend since high school. She was graduating from Michigan State University with a merchandising degree and finishing her year reign as the National Cherry Queen. The couple decided that they wanted to live Up North and be farmers.

Pat, son of the Elk Rapids barber and an English teacher, grew up working on local cherry farms, first skimming leaves off tanks of cherries, then pulling tarp on shaking crews and finally managing crews while he was home from Ferris State University in the summer. Sara was raised on the processing side—her parents operate Great Lakes Packing Co. in Kewadin, where she sorted perfect cherries from the pits, stems and damaged fruit. “Anything you wouldn’t want in your pie, my mom always said,” says Sara.