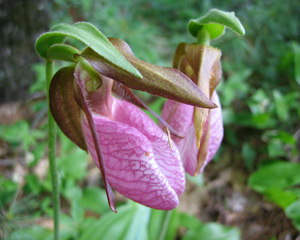 They seduce. They elude. It’s a marvel they can grow at all. Come as we explore the flamboyant enigmas of our woods, bogs and meadows.

Northern Michigan has fertile ground for our own indigenous species—terrestrial flowers that have adapted to our climate and weather. Calypso seems to need cool soil, which is why it is particular to the cold, dry thickets on the limestone and dolomite shores of Lake Superior. Large colonies with hundreds of plants can occur on Isle Royale. Calypso’s namesake is the gorgeous nymph in Homer’s Odyssey—the one who waylaid Ulysses on his journey to Ithaca by luring him to her island. The flower tricks its pollinators with color: Bees are drawn to the brush of yellow hairs on the lip of the plant. Calypso has become a rare and elusive sight in Northern Michigan—perhaps, some speculate, an early indicator of global warming. 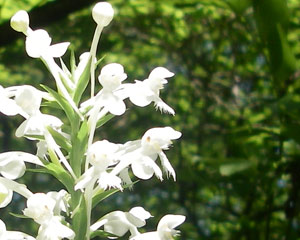 Because they are the most evolved of all the flowering plants, each orchid species has become specialized in a specific environment. While most demand a pristine habitat, some single orchids can crop up in unlikely spots—along a roadside, for example. That is why it is so difficult for anyone to predict just what an orchid needs to thrive, even beyond its special fungal relationship. The white fringed orchid occurs almost exclusively in sphagnum moss bogs.

Perhaps it’s only natural, a human’s powerful draw to the wild orchid. Something that appeals to our vanity—one highly evolved species taking a long look at another. As flowering plants go, orchids are at the top of the stack. They dispersed through millions of years to widely different habitats, and so became isolated from their closest relatives. Their genetic diversity means they produce some fascinating species, flowers that can vary in size from the diminutive calypso (whose nodding blossom measures only a few centimeters) to the vanilla plant (whose vines can grow several feet). Susan Orlean wrote about the intriguing forms in The Orchid Thief: “There are species that look like butterflies, bats, ladies’ handbags, bees, swarms of bees, female wasps, clamshells, roots, camel hooves, squirrels, nuns dressed in their wimples, and drunken old men.” The grass pink, whose cluster of similar petals and sepals take the form of a neat equilateral triangle, is no less captivating. Look for the grass pink in bogs and swamps during early summer. 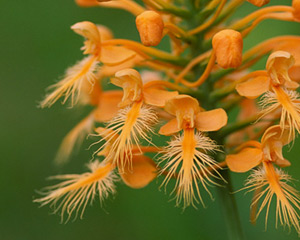 Found right at center of the flower is the apparatus that distinguishes orchid from other plant families: the column. That is, the orchid’s reproductive parts—the stamen and pistil—fused into one handy tool. No other family of flowers has such a device. The yellow fringed orchid is threatened in Michigan.

In summer a spike of miniature downy flowers grows from the rattlesnake plantain’s single woody stalk. Some say the flower’s name comes from the snakeskin appearance of its mottled leaves, which were gathered and used by early settlers to soothe the skin and mucous membranes. 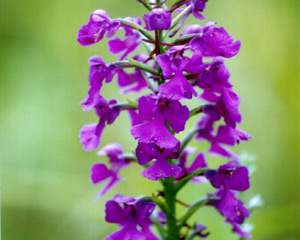 Moths pollinate the purple fringed orchid by sticking their tongues into the bloom in search of nectar then emerging with pollen sacs stuck to it. They carry the pollen to the next orchid. Orchids that are pollinated by moths are often fragrant at night—the scent is released after sunset and fades by sunrise. There are orchids that smell like cinnamon, citrus, coconut, chocolate, even turpentine. Only some orchid fragrances are detectable by the human nose, however, since the scent is meant to relate to the chemistry of the pollinator. Perhaps a bit of orchid irony: Its perfume usually fades soon after being plucked. 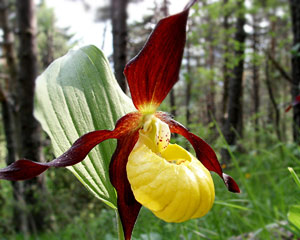 The  yellow lady’s slipper uses a clever little trap; once a bee enters via a tiny cleft running the length of the slipper, it cannot back out. Instead, it must proceed through a tight maze that leads it directly past the pollen sac. Having just one way in and only one way out ensures that the flower doesn’t pollinate itself, thus enabling the best possible genetic diversity.

The pink lady’s slipper is the largest of the slippers. This species often lives in colonies and will grow for several years before sending up its single flower stalk. The pink hue of the large inflated pouch fades with time. 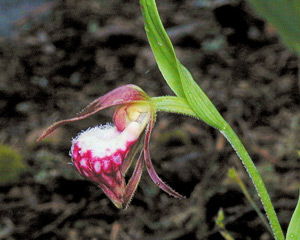 This rare orchid likes the conifer forests of Northern Michigan, often sprouting up at the edge of the forest near the beach. Once pollinated, the upper sepal lowers over the slipper opening, preventing any more visitors. Shoreline development is the biggest threat to the ram’s head lady’s slipper.