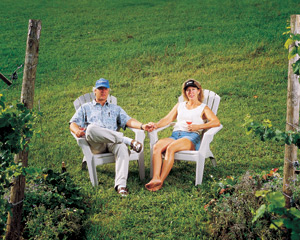 But it is along the eastern edge of the garden where the Schuberts’ most coddled crop grows: two rows of spindly grape vines that Art refers to as “an experiment.” This early in the season, none of the vines stand more than knee high. A few are just stubs. But the rest have leaves that emanate a pale green newness under the golden sunlight. Linda stops next to a vine that barely reaches the hem of her floral-print dress, then throws her arms wide: “Welcome to our vineyard!”

The Schuberts are backyard vinters. People who, for the fun, the love, the challenge—but never the profits—coax sugary grapes from a handful of vines for their own winemaking attempts. Attempts—plural.

The couples’ hobby started in 1994, but it didn’t spring from any particular passion. They both liked wine, found it pricey to buy. Linda had a friend who grew grapes commercially, keeping a few to make wine for herself at home. Art noticed how the wild grapes thrived around their place—even during the drought of ’88. So one fall day Art up and put the wild fruits through the winemaking process, and voila … sort of. “I didn’t do it quite right,” he says. “It tasted like vinegar. But it was fun.”

An engineer by trade, Art was motivated by the failed experiment. Linda, a longtime gardener knee-deep in the Master Gardener certification process, was intrigued. They decided to track down a few vines of a cultivated variety, plunk them in the garden and try again.

Today, the Schuberts’ garden is a testament to second tries. Riesling, Pinot Noir, Lemberger, Blau Fränkish, Chardonelle, Traminette grow here—but only 35 vines. With so few vines, babying them is a luxury the Schuberts can afford. Where most wineries prune once or twice a season, the Schuberts snip here and there every few weeks, studying each vine before making a single cut.

Following the brutal spring freeze of 2003, when temperatures plummeted to 10-below for three consecutive nights, an estimated 50 percent of the yield for the local commercial industry was wiped out. The Schuberts lost almost all of their buds. But they didn’t give up. The next winter, Art engineered a rudimentary warming scheme to fight back against freezes—he cloaked each of his bud-bearing vines with Styrofoam panels, and later, wrapped them in strands of Christmas lights.