Float Away on the Upper Manistee: The Itinerary 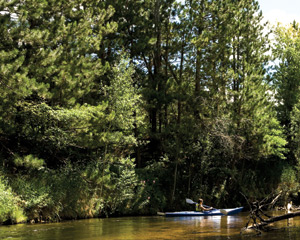 If you’re thinking of kayaking the Upper Manistee, I have two words for you: Do it. I guarantee it will be one of the most peaceful and pretty vacations you’ve ever taken.

That said, here’s an overview of my four-day itinerary, which was inspired and guided by the book Canoeing Michigan Rivers, written by Traverse City’s own Jerry Dennis and Craig Date.

Note: I highly recommend getting this book and photocopying the first four pages of the section on the Manistee River to take along with you (in a Ziploc bag, of course) on your trip. I read and re-read mine roughly 12 times a day—more frequently as night grew nearer and I grew increasingly panicky about where to set up camp. They proved invaluable for peace of mind.

M-72 to (a non-sanctioned campsite) somewhere beyond the CCC Campground: 16ish miles.

I parked my car and put in at the M-72 Bridge (downstream side of the bridge) in Grayling. From here it’s 14.5 miles (5 to 7 hours) to the CCC Bridge, where two campgrounds await on either side of the bridge. While both were easily accessible by low banks, and boasted nice open flats for setting up camp, I was in love with the river scenery, which had changed from cabin-edged to green-tree wilderness, so I kept paddling, pulling up some distance later—a mile or two, maybe?—at a no-camping put-in point (marked by a small, desktop-sized platform on the river, below a steep set of stairs leading up a bluff).

I don’t recommend camping here given the “No Camping” sign, but my excuse was that it was dark, and I was desperate. Had I had it to do all over again, I would have kayaked a little ways past (20 minutes-ish), where, the next morning, I was treated to the sight of about two dozen more accessible banks backed by more appropriate open camplands. Live and learn, I guess.

From somewhere beyond the CCC Campground to just beyond M-66 Bridge: 20ish miles.

By late morning I’d already hit Upper Sharon Bridge—the river speeds up just before, which is great fun—and as the river widens, bigger and bigger islands appear in the river’s center. I found myself wishing I had camped on one of them but placated my yearnings with the next best thing: lunch. I pulled up on a giant island oasis that comes just before a sharp river bend to the right. Here, the low island had a sandy shore and shallows that suddenly dropped to nearly four feet deep. It was perfect for picnicking, wading, swimming and fishing, which explains how I spent nearly three hours here, very happily.

After lunch, I hit Lower Sharon Bridge, coasted a lot, fished some and, because last night’s last-minute campsite had me nervous, recalculated my planned stopping point about 3 billion times.

Mostly, I planned to take out just beyond the M-66 bridge where a former state forest campground waits, but I made it there well before dark so decided I could paddle on a wee bit farther. It was a fabulous decision: The river sped up, miles of grassy banks dotted with trees were around every bend, and by 6 p.m. I had found a beautiful spot with a slightly high bank but a sweet swimming/fishing hole. I set up camp; no houses or cabins were in sight.

I remember this stretch as pretty darn quiet, ever slowing and serene. The banks grow steeper and higher, and it feels much of the time like you’re in the valley of a canyon. Along the way, just before the Coster Road Bridge, some homes and cottages appear, then a public access site, and then all goes quiet and peaceful again. Somewhere along here I set up camp on a peninsula-like bank that jutted out into a severe bend in the river, thinking I would be able to watch the river come and go on both sides from my hammock view.

It was a great idea, until the sky opened up, and I had to toss a tarp over the line strung above my hammock. Of course, then I started worrying about being struck by lightning, seeing as I was dangling between two trees on a mostly open bank, so I got out in the rain, untied and retied my hammock farther inland under the shelter of cedars … and then it stopped raining. Surprise.

Being as it was my last day, I took this stretch especially slow. Saw a pair of bald eagles (have never seen a pair before!), steered more often than paddled, stopped to swim, and still, I arrived at my final takeout at Chippewa Landing in about 4 hours. Sigh.

Anyway, I definitely recommend taking out or, for that matter, putting in here. The folks who run Chippewa Landing were beyond nice, allowing me to have my car parked and waiting for me (two friends picked it up at M-72 and deposited here for me a few days before). Not a lot of liveries are so kind unless you’re renting their boats.

If you don’t have friends as kind as mine—folks who are willing to schlep your car from put-in to take-out point so you can indulge in a multi-day trip down the Upper Manistee—Chippewa Landing will still help: you can drive your car to Chippewa Landing, and the livery will port you and your rented boat to several put-in points upstream of the landing—M-66 Bridge, Sharon Bridge, CCC Bridge or M-72—depending on how many days you want to paddle. Call for rates, 231-313-0832, chippewalanding.com.