Casting Out the Winter Gremlins 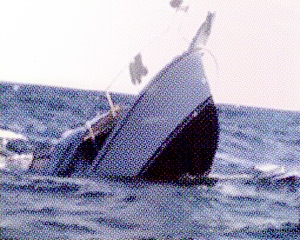 Dave expressed his Gremlin concerns moments after I watched him skillfully back his 29-foot powerboat into the slip along the Manistee River Channel. On the dock, my Australian cattle dog Aussie cautiously approached Dave.

Dave had recently placed his boat into the water after a brutal winter and as with Aussie, he was sniffing things out to determine if his boat was Gremlin-free.

“Things like boat navigation lights that worked fine when you stowed the boat may not work in spring,” said Dave. But of greater concern to Dave are issues below deck like cold water intake lines that cool the engine and the clamps that secure them to connecting joints. Of equal concern are packing glands around the engine shafts that prevent the intake of water through a rotating shaft.

The packing glands allow a slight intake of water to cool and lubricate the glands; however, winter Gremlins can cause the glands to open up or hose clamps to loosen.

“When a boat sits in the water, its load is evenly distributed throughout the hull; however, when it sits on a winter cradle, the support beams absorb more of the load than points in between,” said Captain Steve Hamilton, who occupies a boat slip next to Dave’s boat.

Slight as the imbalance might be, the stress can influence hose clamps around water intake lines and packing glands. These subtle influences can spell disaster if not corrected. Such could well have been the case involving a 28-foot powerboat that sank off Ludington Harbor last May.

The owner had placed the boat in the water at Manitowoc, Wisconsin, after winter storage. Although he had checked out the engine space before departing across Lake Michigan, he failed to check it again while transiting the lake. Eight miles off Ludington, he lost his starboard engine and moments later his port engine. He fired off a Mayday over Channel 16, the International distress frequency.

A Coast Guard rescue boat out of Ludington responded and pulled the five people off the boat moments before it went down in 350 feet of water. How water found its way into the boat remains a mystery; however, one thing is for certain: had the captain checked for winter Gremlins like Dave Gramza does in the safe confines of a harbor, the doomed captain may have spotted the leak in ample time to take corrective action.

Mice and other rodents like rats can gnaw their way aboard to escape winter, while feeding on protein admix boat components like electrical wiring. It all can take its toll, mostly on the unenlightened.

Of the thousands of rescues the Coast Guard conducted across the Great Lakes in 2008, forty-three percent involved disabled boats, many due to mechanical failures. Most of these breakdowns can be avoided through proper maintenance and boat checks before getting underway. And you never know what you might find.

“See that boat over there,” said Dave, pointing to a 28-foot charter boat in a nearby slip. “The captain soon after getting underway with customers discovered a raccoon in the forward cabin. He’s lucky; it could have been a provoked skunk.”

Boat Smart, don’t be skunked. Make sure the boat is Gremlin-free before getting underway. A sure way is to request a free vessel safety check from the Coast Guard Auxiliary or United States Power Squadron. Search Google for exams available in your area.

Tom Rau, a leading authority on recreational boating mishaps, is author of Boat Smart Chronicles, a 20-year chronology of less than smart boating behavior with valuable lessons learned. The book and up-to-date boating mishaps are available at www.boatsmart.net.