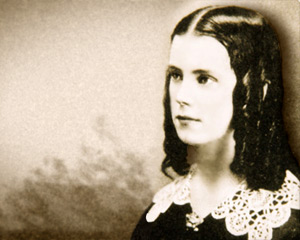 “Heaven lies about us in our infancy!
Shades of the prison-house begin to close
Upon the growing boy;
But he beholds the light, and whence it flows,
He sees it in his joy.
The youth who daily farther from the East
Must travel, still is Nature’s priest,
And by the vision splendid
Is on his way attended;
At length the man perceives it die away,
And fade into the light of common day.”
—Wordwsorth.

It is but little we can do for each other. We accompany the youth with sympathy and manifold old saying of the wise to the gate of the arena, but it is certain that not by strength of ours, or by the old saying, but only on strength of his own, unknown to us or to any, he must stand or fall.”—Emerson.

Does it look well, father?”

“Does this look well?”

William Douglas stopped playing for a moment, and turned his head toward the speaker, who, standing on a ladder, bent herself to one side, in order that he might see the wreath of evergreen, studded with cones, which she had hung on the wall over one of the small arched windows.

“It is too compact, Anne, too heavy. There should be sprays falling from it here and there, like a real vine. The greenery, dear, should be either growing naturally upward or twining; large branches standing in the corners like trees, or climbing vines. Stars, stiff circles, and set shapes should be avoided. That wreath looks as though it had been planed by a carpenter.”

“Miss Lois made it.”

“Ah,” said William Douglas, something which made you think of a smile, although no smile was there, passing over his face, “it looks like her work; it will last a long tme. And there will be no need to remove it for Ash-Wednesday, Anne; there is nothing joyous about it.”

“I did not notice that it was ugly,” said the girl, trying in her bent posture to look at the wreath, and bringing one eye and a portion of anxious forehead to bear upon it.     “That is because Miss Lois made it,” replied William Douglas, returning to his music.