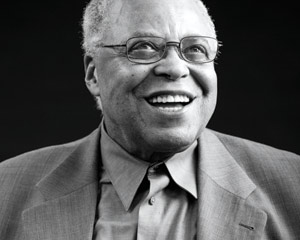 Brethren’s tolerance, Jones believes, began with the Dickson School faculty. “Let’s look at the teachers who are the pulse beat, the heart and soul of schools still today,” he says. “I remember Mrs. Flaherty. She was just as advanced as Donald Crouch. I just didn’t have any classes with her. We adored her.”

After several minutes talking under the oak tree, Jones’s assistant, Coddy Granum, politely interrupts to tell him that the Brethren High School drama class has walked across the road from the school to meet him. “I told them if they want to come back in a bit. …” she begins.

“Let’s go shake their hands right now … a quick handshake,” he says getting up.

Cane in hand, Jones steps to where the students are gathered at the edge of the quiet street. Jones is more of a hero here than he probably realizes—his donation of a Darth Vader helmet to Brethren High School for an auction students held to benefit Katrina victims has become legend in Manistee and the surrounding counties—and the students hang back from him, smiling but unsure of how to greet him.

He takes the stage. “I’m sorry I couldn’t accommodate them better than this,” he says to their teacher, Deb Crandell, and gesturing at the street. Then he reaches out his hand to a student. “How are you? What’s your name?” He repeats the words again and again, bending forward to hear each name. When he comes to a sandy-haired girl in blue jeans and a T-shirt who says her name is Seneca he says, “Seneca? Seneca! That’s a nation. Seneca Nation. It’s a tribe. Are you Native American?”

But then the next student is saying “Terry,” and he doesn’t hear her answer. When all the students have finished introducing themselves, Crandell gives a short, impromptu speech ending with the words: “Thank you for leading through the arts and, um, changing the world. We’ve admired that.”

Jones softens his voice, lowers it to just above a whisper and says: “I guess it’s so-called accidental work because that was not my intention. My intention was to try to express myself. I’m glad that that was the effect.” And more loudly to the children, “I hope y’all have that effect too.” Then he says,

“Seneca?”“Yeah, Seneca,” the girl says.
“Do you have Native American blood?”“I don’t think so,” the teenager says, giggling.

Several days after Jones has gone back East, Brethren is quiet again. So quiet that when a voice on the loudspeaker down the road at the Brethren High School calls a student to the office, it floats over to the Dickson School where Colleen Tucker, secretary for the organization that calls itself the Dickson School Cultural Center, and her husband, Bill, are working. Since the group purchased the building four years ago for $43,000, using a loan from a board member, the interior has already yielded 11 dumpsters of junk. That is only the beginning of the work that needs to be done.

Donald Stroup, the organization’s vice president and Dickson School class of ’53 is here, too. Tall, white haired and clad in a buffalo plaid flannel shirt, Stroup, like Jones, remembers Donald Crouch as mentor and hero. Stroup’s parents, too, had admired Crouch, who sometimes pastored at their Lakeview Brethren Church, so much so that they named Donald after him.