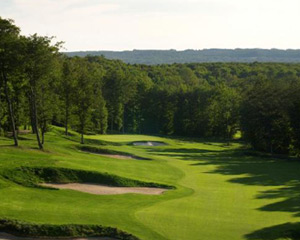 Treetops, long known for running the best tournaments in the Midwest, has announced the First Annual Treetops Cup.

Simply contact Treetops and sign up for the Treetops Cup Package. The package is one night and two rounds for $225 per person based on double occupancy. Additional nights and rounds can be added at nominal fees. Then? Golf your heart out. The staff at Treetops will collect each foursome’s scorecard from the qualifying round and determine the top 3 out of 4 scores via the Peoria Handicapping System. (Each golfer that attempts to qualify by signing up for the Treetops Cup package will receive a Treetops Cup hat in their respective team color.)

Shortly after the qualifying deadline of August 9th, 2009, the top three foursomes from both the United States and Canada will be invited back, FREE OF CHARGE, to represent their country and compete in the matches on September 11 through 13, 2009.

These 24 individuals will receive a weekend package that includes a practice round, Friday’s opening ceremony and draw party, two team shirts for each day of competition, Saturday’s dinner banquet, a half-hour clinic from Rick Smith (who will also serve as honorary starter for one round of matches) and three 18-hole matches, which will include Foursomes, Fourball and Singles play. The winning team will also have their names engraved on the perpetual Treetops Cup.

Rick Smith is very excited to host and stated, “Having attended several Ryder Cup matches myself, there is no better sports spectacle.  Giving the everyday golfer the opportunity to represent his/her country in an event like this will leave them with a memory they won’t soon forget.”  Smith continued, “There is no better location in the country to play Ryder Cup style matches than Treetops because of the great variety of golf.  Each round of matches will be on a different golf course providing for any possible outcome.”

Lodging at Treetops consists of 238 guest rooms from standard to deluxe rooms, hospitality suites, chalets, townhouses and condominiums.  In addition, Treetops has over 20,000 square feet of dedicated meeting facilities and an onsite convention center that can host 850 attendees. Treetops also is proud to have three terrific restaurants, Treetops Salon and Spa, Nautilus fitness center, an award-winning child development center, retail shops offering a variety of clothing and equipment, indoor and outdoor heated pools and much more.