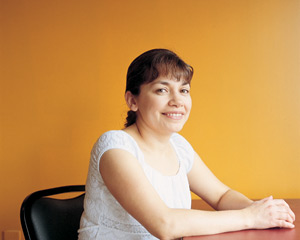 A small crowd hovers at the counter of the sunny new Petoskey Street taqueria—people craving Maria and José Lopez’s delicious tacos. They make them like the ones served at street stands in their native León, Guanajuato, Mexico: warm, crackly corn tortillas; freshly grilled steak, chicken, pork or chorizo; a bright bite of onion and cilantro; and tangy salsa. Order them up with a side of Maria’s beautiful guacamole (one of our 2007 Best Eats), which she makes right on the spot with lots of lime and fresh cilantro.

Background: Hails from Milwaukee, and originally from León, Guanajuato, Mexico. Opened an authentic taqueria with her husband, José, in downtown Petoskey in December.

What makes your flan so fabuloso?

The base is chocolate cake, the top is the flan. My mother-in-law, Valentina Abala, used to make that kind of flan for many years.

Most ordered thing on your menu? 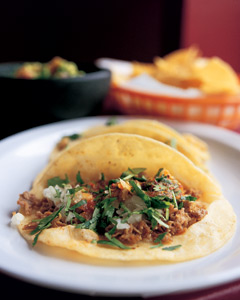 Chicken and chorizo tacos. People ask a lot of questions about the menu. We’ve made a lot of chorizo fans.

What is the secret to your wonderful guacamole?

A lot of people just come in for the guacamole. I just make it at the moment they order it.

On Fridays we make something special—enchiladas, chiles rellenos, fajitas. We make the enchiladas in a big baking pan, and they are really good when you put lots of oil in the skillet and cook the corn tortillas first.