Miracle in a Diner 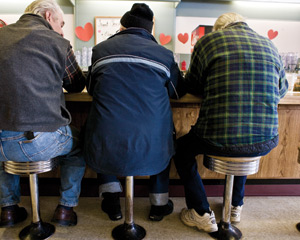 Ellsworth’s diner was dead. Shuttered, like the Ellsworth Grocery. The bait shop, too. Locked its doors suddenly in January, and the guys that went there every day at 2:30 to sit by the tackle and drink coffee found themselves with nowhere to go and talk about the world.

Instead of tumbleweeds, malaise rolled in from the roller coaster hills surrounding this rural, Dutch-settled northern town. Fewer shops open meant less traffic through town, sucking the folks in Ellsworth into disconnectedness and economic despair.

Then, a downright crazy idea sprouted in neighbor Bob Felton’s mind. He’s the outreach facilitator at Ellsworth Christian Reformed Church. What he knew: fellowship and a good meal went hand in hand. He believed that if the diner came back, things wouldn’t seem so grim. People would get out of the house. Clergy could eat lunch with the townspeople and get the pulse on people’s needs. Everyone—inside and outside the church—would have a place to gather, to grab a bite, feel welcome.

He wasn’t wearing rose-tinted glasses. He knew the restaurant business can be brutal, even more so in a small town. Ellsworth’s diner had burned through four owners in 10 years, most of them gung-ho at first, but crumbling under the effects of sleep deprivation, worry. Bob’s idea was to share the burden, take all the village, and create a nonprofit cafe.

He rallied people he knew—a life-long dairy farmer, a go-getter, a school teacher, a Good Samaritan, a prior owner of the diner when business was booming—and together they wrote a tight little business plan. They actually considered the chilled economic climate a selling point for starting a family restaurant, and doing it now. The diner’s current owner agreed to be paid in increments for the cost of the building, which came with all the kitchen equipment. Nothing on the menu would be over $5. There would be only four on the payroll, all others who worked there would be volunteers. People would eat pancakes and sausage at tables they’ve wiped clean before.

Board members loaned their own cash for startup costs. And even though it doesn’t have one, they called their new gathering place The Front Porch.
Today a shellac of ice covers C-48, the road to Ellsworth newly named The Breezeway in an effort to route business and tourist traffic along this scenic corridor between Atwood and East Jordan. Slipping into Ellsworth at 8:30 a.m., there is a little rainbow over the ball field at the elementary school, formed from ice crystals in the 9-degree air. Up the hill from the Moms and Tots Center and the Ellsworth Christian Reformed Church, a gentleman is chinking ice off the sidewalk in front of The Front Porch. He’s a volunteer—John Hastings from Hastings Funeral Home across the street.