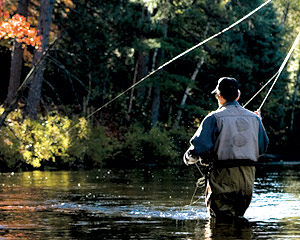 Anglers of the Au Sable, a non-profit organization dedicated to preserving, protecting, and enhancing the Au Sable River system for future generations, recently announced a double-match grant from the Orvis Company together with the National Fish and Wildlife Foundation. The grant will help restore trout habitat on the South Branch of Michigan’s fabled Au Sable River.

The matching grant sponsored by the Orvis Company, based in Manchester, Vermont, and the National Fish and Wildlife Foundation is a unique two-to-one match.

For every dollar donated through the Anglers of the Au Sable on behalf of this grant, Orvis and the National Fish and Wildlife Foundation will each contribute a dollar. The money raised will help restore wooded debris in the river as well as stabilize eroding banks damaged by logging companies in the last century. “The river was stripped of most of its natural trout habitat, during that time,” Gates said. “These monies will go a long way to restore the habitat.” This work will be done just below the Mason Tract from Smith Bridge at M-72 downstream to where the South Branch flows into the main branch of the Au Sable, about an hour east of Traverse City.

In 1955, when industrialist George W. Mason gifted to the State of Michigan 14 miles of undeveloped river and surrounding land for fishermen, it became known as “The Mason Tract.” The Anglers of the Au Sable last year was instrumental in helping to defend the Mason Tract from drilling, thus preserving this special wilderness area as Mr. Mason intended. Through the years, the Mason Tract has become synonymous with the South Branch of the Au Sable.

“With this double-match grant, Mr. Mason’s legacy will continue to be carried into the 21st century and beyond”, Gates said. “It is truly remarkable to see this type of grant offered in the present economy, and we are very thankful to Orvis and the National Fish and Wildlife Foundation.”

Money can be pledged through Orvis or a check can be directed to The Anglers of the Au Sable, 403 Black Bear Drive, Grayling, Michigan 49738, indicating the donation is for the Orvis grant. Deadline for contributions is Dec. 31, 2009. For more information, contact Bruce Pregler, Anglers of the Au Sable (248-813-9900).