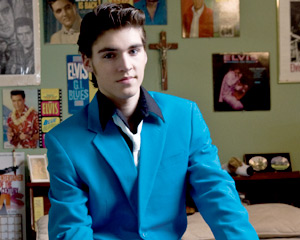 Yes, Elvis tribute artist and Bellaire High School junior Jake Slater has the very same measurements as the King’s in 1969, before the pain killers and fried PB and banana sandwiches. He’s cultivated the pompadour, but it’s a lot of work, so he’ll let it “lay down flat on a normal day.” He has two new jumpsuits and definitely has the Elvis moves (more on that in a minute). But seriously, it’s the voice. A sincere, soulful voice so far beyond his 17 years and so uncannily close to Elvis’s own that your jaw will hit your heels when you hear it.

Slater admits when he first started emulating Elvis, singing to a record in his Bellaire bedroom, “I had to force the rich notes. But now that my voice is more developed I don’t have to force it at all. I feel very fortunate and very blessed. People say when even I talk I have that sound. I don’t notice it, it’s just me.”

He auditioned for his first gig—a show at the American Military League in Traverse City—after a 10-hour day mowing lawns. He’s followed with performances at car shows, restaurants and private galas. His mother, Sherri Slater, is his manager—and she’s funneling what income doesn’t go to sound equipment or costumes custom-tailored by a Traverse City seamstress straight to his college fund.

His room is an Elvis museum, with movies, memorabilia, and even a long white silk scarf that belonged to his hero, and a nice-sized trophy he got from winning the early-years Elvis competition at the Saginaw King Fest at Temple Theatre in January. “I was so nervous, but it’s kind of like a family. They share outfits, share music, give each other tips.”

So what’s his newbie advice for other Elvis wannabes? “A lot of tribute artists are sharp and jagged in their moves, more like a Michael Jackson. Elvis was smooth.”

Root for Slater as he competes for the youth title at the Windsor Elvis Fest in Ontario in June, and give his mom a call. Maybe you’ll have an Elvis spotting at your wedding or family reunion this summer. 231-331-4023

See for yourself: Jake Slater Video

(Your so Square) Baby, I Don’t Care