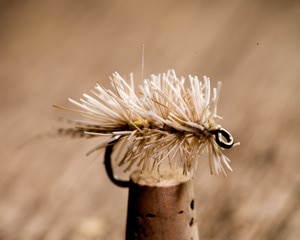 Paul Young is known mostly as a flyrod builder, having established an international reputation from his shop in Detroit. But he was also a great fisherman, and, according to Bob Summers, who began working with Young as a high schooler in 1956, Young was especially adept at fishing streamers, or wet flies. These flies sink rather than float and are designed to mimick trout food under water. The strawman nymph is Young’s most well-known attempt at designing a fly. Young “had a great personality, everybody liked him,” Summers says. He recalls hearing stories that during World War II, Young went around to veterans hospitals and taught soldiers how to tie flies, understanding, perhaps, that time on the river, or even dreams of time on the river, would help them heal.