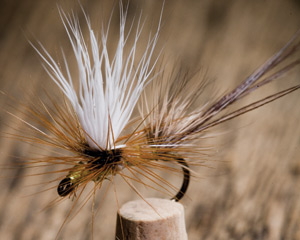 Grayling locals remember Clarence Roberts, from the mid-1900’s, as an embodiment of what a conservation officer should be. He worked hard at his job, and though he was nice, people also respected him as an enforcer, and above all he had a reputation as a CO who adhered doggedly to the rules. Word has it that he severed communications with a close relative for two years after learning of a deer hunting violation. Roberts even looked the part of an idealized CO. “He was a good looking man, pretty big with good shoulders on him,” recalls Jerry McClain. And in Roberts’s spare time he fished and tied flies. Some say he put a couple of kids through college with his fly-tying money—helped along by the rapid rate at which he tied. “He had these big mitts for hands, but somehow these beautiful, delicate flies would come from them,” says Rusty Gates of Gates Au Sable Lodge. Roberts developed his Roberts Drake to match the yellow-bodied mayflies on his home waters around Grayling—the South Branch of the Au Sable River was his favorite, says McClain.

Return to the master list of Fly Fishing Icons