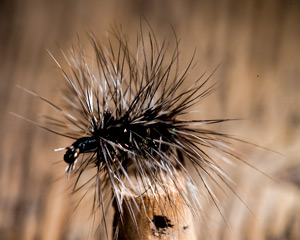 George Griffith is one of the founding fathers of Trout Unlimited, the international angling and conservation organization, and the earliest TU meetings happened in his house on the Au Sable River, near Grayling. The Griffith’s gnat works magic on Michigan rivers and many other rivers as well. But there’s a bit of a mystery surrounding the Griffith’s gnat’s true heritage. Some say George Griffith invented it. Some say he worked with a friend to invent it, but did not actually tie the first one himself. Some say a friend of Griffith’s invented it and just named it after him. Some say Griffith himself denied inventing it. Off the record, two icons of Michigan fly fishing said, “I don’t want to be the one to dispel the myth.” So they left it up to us. If you know anything about this situation, feel free to drop a comment below. In the meantime, tie on a Griffith’s gnat next time a midge hatch is underway. After all, there’s no disputing the gnat’s allure.