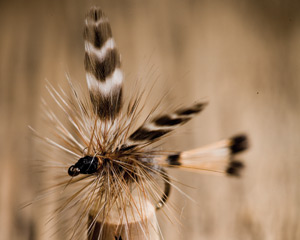 Back in 1922, Judge Charlie Adams was fishing the Boardman River near Mayfield when he noticed an insect hatch was underway, but he didn’t have a fly that matched the look of the bugs rising from the waters. He walked over to his friend Len Halladay’s house, near Mayfield Pond, and asked the hotelkeeper and fisherman to tie a new pattern. Halladay sat at his table and wound together a body of gray wool, wings from a Rhode Island Red rooster, and Judge Adams headed back to the river with what became, in many people’s opinions, the most widely used fly on earth. Halladay had already created a “Halladay fly,” so he named his latest after his friend. Relive the magic moment: Mayfield Pond is now a park; tie an Adams on and lay one on the surface.

Anglers generally believe that the Adams doesn’t look like any one particular insect, but it looks enough like several of them to be effective in a wide variety of conditions.