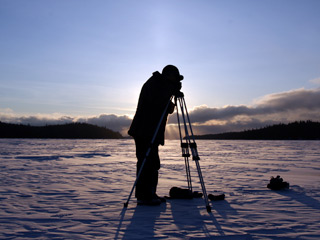 About four years ago, when George Desort was a recent grad from a film program at Chicago’s Columbia University, he loaded up his kayak with gear for camping and video and circumnavigated Lake Superior’s Isle Royale. “I was thinking of making something like a video journal,” he says.

But on the last night of his trip he had an encounter that took him down an entirely different path, and a captivating path, at that. Rolf Peterson, who directs the longest-running (now 51st year) wolf study on the planet, walked into his camp. “He asked me what all this camera gear was for,” Desort says. After Desort explained, Peterson said that he had been wanting to make a documentary to celebrate the golden anniversary of the wolf research and wondered if Desort had any interest.

Desort couldn’t believe his good fortune and returned the following April when the research crew headed back out to the island. “That first day they found a pregnant moose in the campground, and they said try to get some footage and left me there.” After nine hours, the researchers became concerned and went looking for Desort, who was still on the job. “The footage wasn’t great, but they were real happy that I was still shooting and that the moose seemed very comfortable with my presence,” he says.

Throughout the ensuing months he spent 100 days on the island shooting video of the researchers at work, the moose that the wolves hunt, the landscape and rigging up motion-activated cameras at moose carcasses—the only way to get good ground-level video of wolves on Isle Royale, since the vegetation is so thick and the wolves are so elusive.

Desort ended up working on the project, which he eventually titled “Fortunate Wilderness,” over the next four years, including weeks shooting in the winter and including time off to earn money through his family’s estate sale business to self-fund the film. He received no grants other than free office space at Michigan Technological University, where Peterson works, and some free housing.

An amusing challenge of editing the film was trying to show the passage of time. Desort had old images to work with, but “over 30 years I swear these guys have not aged,” Desort says. “And they wear the same clothes and they even fly the exact same airplane.” (Hey, it’s the U.P.)

One of the most moving moments came when he showed the documentary at the 50th anniversary celebration on Isle Royale last summer. The original team pilot, a Minnesota man, is now 87 years old and is blind. “He told me the only thing that kept him alive is wanting to see this film, and it’s what brought him back to the island after 30 years,” Desort says. “Of course, he couldn’t see the film, but he could hear it.”

After the film’s debut, Desort spent the winter of ’08-’09 showing the film at screenings around the Midwest. Now he’s putting the finishing touches on the DVD, which he expects to release June 1. Learn more and purchase a DVD at the Fortunate Wilderness website.

Also, check out Desort’s video journal of the project.

Get travel tips about Isle Royale and five other islands we love.