Dave Mahan and the Skegemog Swamp 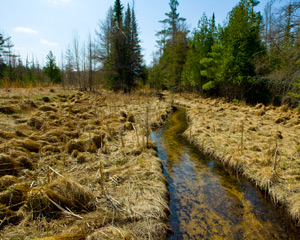 This interview is a MyNorth Web Extra that accompanies "Along the Wild Fringe," a photo-rich feature story about kayaking the Skegemog Swamp shoreline in the May 2009 issue of Traverse, Northern Michigan’s Magazine.

David Mahan is now Great Lakes Program Director of the Au Sable Institute, but back in 1981 he was freshly graduated with a Ph.D. degree in natural resources and a new job with The Nature Conservancy. One of his main projects over the ensuing four years was getting to know Skegemog Swamp up close and personal. We asked Mahan to share some of his memories and opinions about what Skegemog Swamp means in the broader context.

Give us a sense for Skegemog’s role in launching the land conservation movement up here?

I remember giving money to Grass River Natural Area as a grad student back in mid-70’s as my own personal awareness if the need for land protection grew. And I would say that those two projects, Grass River and Skegemog helped establish a group of people committed to land conservation in this part of the state. And if you look at where the land conservancies started up here, the first was near Petoskey, the Little Traverse Conservancy, and then a group of us started the Grand Traverse Regional Land Conservancy, in Traverse City. Skegemog had a significant role in mobilizing people and showing them that land conservation was important. We had stuff in the paper and field trips. I led trips where 60 people showed up. And the Skegemog committee was quite effective at getting their message out.

Is it surprising to you that people were willing to support the preservation of something that was so impenetrable, so difficult to enjoy, as Skegemog Swamp?

I think a big thing that people had begun to understand by the late 70’s is that if you live on a lake, you want its water quality to be maintained. Keeping Skegemog Swamp natural was a good investment because it filtered so much of the water that entered the lake. As people understand more about ecological ideas, they understand that wetlands are important. And one of the things to remember about Skegemeog that we had in our favor is that most of the shoreline was just not developable. If that was shore along Elk Lake, there’s no way we would have had the same success. But because it was remote and not developable, it made the argument for its preservation easier.

You spent a week or more every year for four years on the ground in Skegemog, give us a swamp-level view of what’s out there.

Skegemog Swamp is not just a swamp. It’s a combination of wetland types—bogs, fens, swamp, marsh. It depends on drainage and depth of water table which type of plant community you will find where. Skegemog also receives so much groundwater, which is why you have so much fen peatland with mucky soils that are more nutrient rich than a bog. And that’s why you find things like showy ladyslippers and other calcareous plants down there, some of the unusual things that give Skegemog its allure. If Skegemog was one giant bog, with the inherent lower biodiversity of most bogs, people would be a lot less excited about it.

I have walked from the railroad grade all the way west down to the lakeshore, and that was not a fun day, but I did it to get a sense of the natural communities. I put on waders, and sometimes I was on dry ground and other times I was in four feet of water. Even in the midst of the swamp I might suddenly find sandy soils with pine, probably and old remnant beach ridge left from a higher level of the past Great Lakes.  The ‘swamp’ is a natural mosaic, not a one-community type of environment.

I would never encourage anyone to walk from Rapid City Road directly west to the lake. There’s a real danger of getting lost and a real danger of falling in a hole. It is not something you should do on a whim. Even in winter when things are frozen, there are open areas of water in there due to the continual groundwater inputs.

How many massasauga rattlesnakes have you seen in Skegemog?