So a Girl Walks into a Bar: Traverse City Night Life 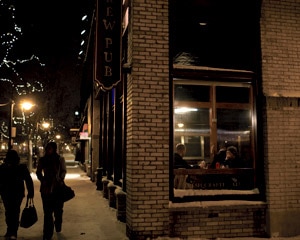 8:09 p.m. Can you go wrong with a place whose entrance sign reads “No youngsters under the age of 8 after 5 p.m.” I think not. Which is why, welcomed by the soft glow of stained glass lights and the muted clink of forks and plates, I stomp a snowy trail between the rows of low club tables to belly up to the bar at Mode’s Bum Steer. The reason I love this place—besides being home to the best cheeseburgers I’ve ever inhaled—is its old-school vibe and classic clientele, usually a small clan of raspy-voiced old men sipping whiskey inside a cloud of smoke at the end of the bar. The place has gone nonsmoking, so unfortunately, the only thing I see past its prime tonight is a generously moussed 80’s era perm that appears to be eating a steak. I sigh and order up a Manhattan.

8:19 p.m. The 30-something couple seated at the table behind me is on a first date. I know this because I’m eavesdropping, and following a long silence she asks what no wife or girlfriend would care to: “So-o-o-o, what’s your biggest pet peeve?” He murmurs something inaudible. She prods. He murmurs again. She emits a long, forced laugh. They fall silent again. The date is not going well.

8:42 p.m. I stand corrected. They are making out over a half-eaten baked potato.

9:15 p.m. My pal Emily has joined me, and we scoot up the quiet street to Red Ginger at the east end of town. I love the chichi urban feel of this place. It’s minimalist, a Zenlike union of low lights, high ceilings, brick and glass—like a big city loft, only street level and with sushi. Fighting the urge to moonwalk Billy Jean–style over the two light box squares encased in the pavement at the entrance, I follow Emily inside.

9:17 p.m. We spend several minutes unwinding our scarves, peeling off our parkas, our mittens, our hats and stuffing the whole puffy affair into a pile on the stool beside us.  Herein is the glitch with “going out” Up North in winter weather, at least for ladies: there is no gussying up. There is only hat hair. Boots shaped like dinner rolls. Earrings that snag on woolen scarves, and noses that turn bright, bulbously red. I suspect this is how push-up bras remain so popular.

9:21 p.m. Emily shoots me the big-eye head tilt. I turn, casually as possible, following her gaze to a blonde woman at the bar whose feet are encased in black leather stiletto boots. Impossibly chic ones. I gasp.

9:22 p.m. Our eyes dart around, taking inventory of the number of high-heeled shoes and boots tapping on the snow-puddled hardwood floor. I glance down at our own marshmallow-ey boots and vow the next time I step out for a night on the town, I’m stepping it up a notch—flats, hats and downy parka be damned.

9:42 p.m. Step, schmep. I care nothing for fashion; I have a nearly drained Red Dragon in my hand. It is a girl-a-rific concoction of raspberry vodka, pomegranate puree and O.J. in a pink—pink! I love it!—raspberry sugar–rimmed glass. Each time I sip I try to gnaw at the sugar without calling attention to myself. Emily’s sipping a passionfruit mojito. We’re toasting, gossipping, cackling at our good fortune to be out on a night so wonderful as this. We are in love with the world, we are in love with our drinks. We are feeling the love.

9:51 p.m. Our incredibly patient waiter, French—French! I love it!—consents to a picture with us.  He doesn’t mind that it takes six tries before we get the flash figured out, so we love him, too. Soon, I’m kneeling on a stool and half of the people sitting at the bar below are grinning up at my viewfinder. And herein is the marvel of a small town like ours: no one questions a stranger with a camera. They simply squeeze in close and smile.

10:21 p.m. Scarves swaying behind us, we hustle under the hum of the State Theatre’s marquee lights, crossing the street toward their backward reflection. It bends, brilliant red and white, over the dark shop windows. Except for the blocks of twinkling white tree lights stretching west along Front Street, the sidewalks are dark. Quiet. Then the din of a party long since started seeps toward us. We follow the muffled ruckus to its source: the U&I Lounge.

10:37 p.m. Bouncer at the door. Marlboro haze in the air. Darts, mirrored Bud signs, classic rock, red vinyl booths and a game of Big Buck Hunter 2008, “Call of the Wild.” The U&I Lounge is the kind of place a true Northerner can call home. So it strikes me as strange that sitting in the booth opposite ours is a boy who looks fresh off a Russian submarine. I eye his navy pea coat, jaunty cap, scarf and wire-thin, waxed-to-perfection handlebar mustache.

10:39 p.m. He catches me staring. I yell over to him: “Is that your real mustache?” He nods and tugs one of the perfectly curled tails, yells back that he’s training to be a chef and the handlebar helps him stand out. His name is Jules, and he and his booth buddy, James, on leave from the air force, hail from Wellston.

11:09 p.m. Above the din of AC/DC, the boys tell us old high school stories, wax both poetic and plain about the river that shaped and aged them, the Manistee, which took Jules’ father’s life. “It was his own fault,” Jules says simply, stubbing out his cigarette and reaching for his beer. “His own fault.” We don’t ask. They move on to quarter-life crises, the war, the economy. Although Emily and I are 31 and 34, Jules, age 24, answers all yes/no questions with a yes or no, ma’am. “Are you calling us ma’am because you think we’re old?” I finally ask.

11:38 p.m. A guy in a floppy knit cap pops his head over our booth back. A friend of a friend from Wellston, he recognizes James. Emily and I leave the boys to catch up. As we slide out of the booth, Jules stands up from his seat and wishes us a good night as he shakes our hands. They don’t seem to make boys like that anymore. But they should.

11:44 p.m. When we step from the cold into the connected combo of Dillinger’s Pub and Bootleggers—aka Dillyboots, the doublewide—the spicy-sweet scent of clove cigarettes wafts over me. Emily’s glasses steam. When they clear, we do a survey stroll. Dillingers is brightly lit, booming with hip-hop; Bootleggers is dark, mellow. Both are crowded with boys in half-turned ball caps and girls who look us up and down as we pass in our coats and hats. I see an old friend, hug, chat, but we move on. Only two hours left.

12:06 a.m. I can’t help but love a bar with good beer and a couch. So while we’re too late to recline with a pint at Right Brain Brewery—it closed at midnight—and we’ve skipped our weekday happy hour spot, Firefly, we’ve still got Kilkenny’s, the giant yet cozy Irish-style pub below North Peak that boasts not only a couch but an elevated throne next to a pseudo-fireplace.

12:07 am. Kilkenny’s is raging. The band Three Thumbs Up is rocking heavy guitar and drums on the stage; swarms of people are squirming and shaking under a smoky haze colored blue and red by the dance floor lights. People are crowded along the bar and the pool tables and everywhere else there’s a free inch. There’s a guy in a kilt on my couch.

12:39 a.m. The guy in the kilt is still on the couch. He appears to be sleeping, legs akimbo. Some women standing nearby discuss whether or not we should wake him or helpfully push his knees together.

12:42 a.m. The flash has revived him. He throws his foot on a table and poses like a Scottish King for my camera. Everyone around us is laughing, heads bobbing, yelling. I raise my Guinness and toast him. “I like your kilt,” I yell across the table. He raises his glass. “Why are you wearing a kilt?” I yell. “For a funeral,” he shouts.

1:30 a.m. The band’s left the stage, but it seems the whole town’s here for last call. We see the gang from Red Ginger. The boys from U&I. A man with a pouffy, permed mullet who looks to be the love child of Hall & Oates. There are gorgeous girls in strapless dresses. A gang of motorcycle mommas and papas. Hippies. Punks. Regular folks. Married men in collared sweaters; giggling girls in tight ones. And a nerdy reporter scrawling it all down in her notebook.

1:54 a.m. The lights come up and baby-faced bartenders and waitresses herd the squinty-eyed stragglers toward the stairs. Emily and I head up and start the long, cold walk home through the snow. Spring may still be weeks away, but as the echo of shouts and laughter fades behind us, and we pick our way, giggling arm in arm down the icy sidewalks, for the moment at least, I don’t mind waiting.