Imprinted by the Northwoods 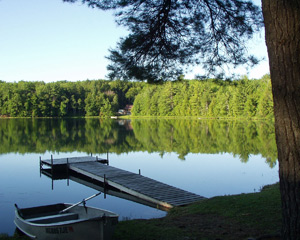 Like salmon, some of us must have the same kind of imprinting—only ours is to the scent of the cottages and cabins of our Up North childhoods, which brings us back year after year even into our adulthood. For the last 14 summers I have rented the very same cabin that used to be my family’s cabin in Michigan’s Upper Peninsula. The cabin has changed some—it has been enlarged, and now has the amenities of a shower with hot running water, a microwave, and even a washer and dryer. Other things have changed too. The chipmunk population (that teased and tormented our Brittany spaniel) seems to be down considerably. As is the grasshopper population. We broke many brooms trying to hit the grasshoppers in hopes of stunning them to capture for fish bait. I also didn’t hear the sounds of the Sandhill cranes calling from the upland plains surrounding the cabin. And the lake seems considerably smaller than how I viewed it as a child.

What have not changed are the scents of the fragrant white pines, and the potent mix of northern woods, earth, and water; as well as the musty smell of the cabin. Not only are these scents intoxicating, they somehow bring forth all sorts of memories buried deep in our brains. My brother and sisters joined me at the cabin for a couple of days, and the memories flowed. Some came from times when we were children, and stories of other children who vacationed with their families in cabins on the lake each year. One came by and spoke to us. He filled us in on the whereabouts of playmates from years gone by. More stories came forth—of a blind boy who used to navigate through the woods by clapping his hands, and how his dad turned to him one night; lost, when it had grown dark after fishing. The blind boy led his dad out of the woods to where the truck was parked.

More memories and laughter flowed, as we spoke of fish caught, and fish that got away, of campfires, and a diving platform, of horseshoes, and tree forts, of encounters with wild animals—a snake in the bathroom, a bat in the cabin, bears at the dump. And now this time, I have a new story to tell, of a black bear running down to the water at night while I was sitting on the dock, listening to a loon calling, as I took in the amazing scene of a star studded sky. I return to the lake and this cabin for one week each year—now with a golden retriever and a kayak. For years I found only one channel on the television, and this year there will most likely be none. There is no phone—not even cell phone service (I have to drive 12 miles to get that); or I can paddle across the lake and call from the pay phone booth located outside the general store.  And yet every year I return … like others I have heard of—children, now grown into adults, who spent summers in the Northwoods—returning year after year, generation upon generation—called back by some powerful ancient imprinting, like salmon to the streams of their beginnings.

Start a summer tradition for your family with a U.P. rental cabin, or invest in your own to pass down for generations.