Fish from a Kayak 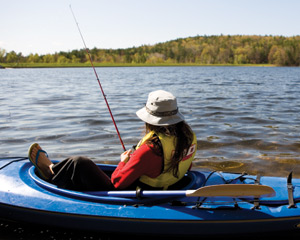 Inveterate angler, aquatic biologist and author of Fish of the Elk River Chain of Lakes, Doug Fuller shares why and when he likes to cast a line from a kayak. “One reason is the easy factor. It’s so easy to throw a kayak in the truck, drive to a lake and launch. Also kayaks are small and limit the amount of stuff you can take, which keeps it simple. And my kayak is so maneuverable I can get into really shallow water, tight nooks and crannies close to shore. The biggest fish I’ve caught from a kayak was a 24-inch coaster brook trout off the shore of Lake Superior Provincial Park, in Ontario. It was a beautiful fish.”

Sweet Water for a Kayak Fisherman

This article first appeared in the July 2008 issue of Traverse, Northern Michigan’s Magazine.