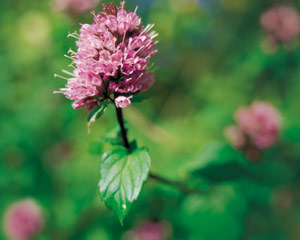 I remember finding it in childhood. I was crouched behind a woodpile in a twilight game of Kick the Can with my cousins. My foot crunched a patch of fuzzy green leaves, and a sharp smell split the air. Familiar. Sweet. I pulled a leaf, tapped it between my teeth.

There’s a thrill to finding wild mint, especially as a child. Maybe it’s the idea that you can find food—actual edible plants—in the woods. Never mind the admonition “don’t put that in your mouth, you don’t know what it is.” The smell and taste of wild mint clocks us right between the eyes: “Ah,” you think. “This I know.”

Not that you should fill your mouth with unidentified wild plants when the mood strikes you. But mint is all around in Northern Michigan if you know what to look for. Along sandy shores, in meadow borders or damp woods, mint is one of the surest signs of spring, establishing itself in late April with the first hint of sun. If you’re like most people, you feel compelled to pick it, loving, at least, the crushed smell on your palms. But mint isn’t just some woodland novelty. Pick a sprig and take a closer look. It’s a veritable wonder plant that begs to be used, with a long and colorful history.

The human love affair with mint goes way back, beyond our relatively recent compulsions for Girl Scout Cookies and fresh breath. It shows up in the Bible here and there, used as currency by the Pharisees to pay their tithes (Matt. 23:23; Luke 11:42). But mint derived its name from Greek mythology. When Hades kidnapped the maid Persephone to the underworld to be his bride, her mother, Demeter, went in search of her. There, Demeter (who happened to be the goddess of agriculture) encountered the nymph Minthe, Hades’ concubine. In a moment of spite, Demeter turned her into the plant that still bears her name. The ancient Greeks later loved to perfume their bodies with different scents for particular areas, and chose mint for the arms.

The lovely Minthe is still a seductress, albeit in the slightly less romantic form of, say, aftershave, toothpaste, medicine and candy. Mint lends its heady aroma and flavor to everything from cigarettes and snuff to candles, sweets and potpourri. Much of that flavoring comes from mint oil, which is extracted from the plant through a steam distillation process and is so potent that one pound of it is enough to flavor 135,000 sticks of gum.

The scent and taste of mint has been found in cultures worldwide: cultivated by the Egyptians for ointments, lending tang to Middle Eastern cuisine, adding zest to English teas. It shows up in spells to encourage prosperity and is even sewn into dream pillows to attract visions of the future. And a good sniff of mint is said to soothe headaches and invigorate the senses. 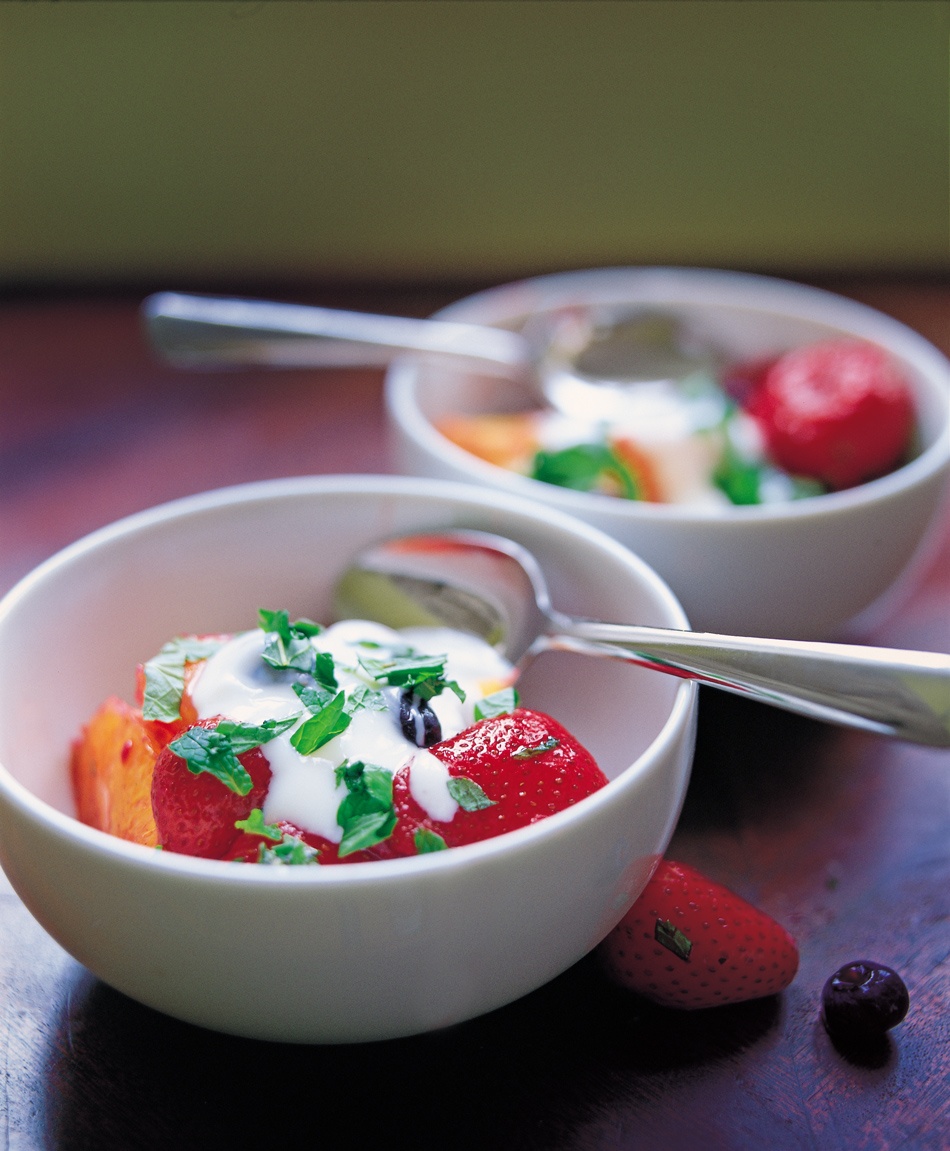 Try our recipes for berry mint salad, grilled lamb chops with mint or crumble your finds into a pitcher of icy fruit tea.

While some of the largest peppermint crops in the world grow in our own backyard—St. Johns, Michigan, north of Lansing—the mint of Northern Michigan, like many things up here, knows no fences or boundaries. But what we pluck from our balmy lakeshore is generally not “wild,” or native mint, but tasty (and useful) peppermint and spearmint gone A.W.O.L. from English-style gardens planted by early settlers. These plants were imported and spread like crazy, because if there’s any one general characteristic of mint, it’s that it’s hard to kill.

Though our favorite mints are foreigners, Michigan does boast native mints. Our sandy meadows are bright with the whorled flowers of horsemint (Monarda punctata) and wild bergamot (Monarda fistulosa). These were named in 1594 after Nicolas Monardes, a Spanish doctor who was awed by the bounty of the Americas and wrote an extensive catalog of the medicinal plants of the New World. The leaves of these fetching wildflowers aren’t as sweet as peppermint or spearmint, but may have played a life-saving role in native culture.

During the long Northern winters, the Ojibwe and Odawa of our region drank teas instead of water, which supplied them with not only flavorful and medicinal beverages, but also with a source for vitamins over the long winter. For the months when their diet consisted of dried beans, squash, and game, tea helped prevent scurvy. Native women combined mint with other herbs and roots for medicinal teas, and settlers even called some wild mint “squaw” mint (likely a misappropriation of the word “ikwe,” which means “woman”). Native Americans also used mint topically to treat burns, or in a very strong tea to get rid of worm parasites contracted from eating bad meat.

You can typically identify mint by its odd, square stem, but from there it runs the gamut of appearance and flavors. (Again, a caution for the enthusiastic novice: never eat anything you can’t POSITIVELY identify.) Botanists have identified more than 600 species of mint; credit the wily plant’s ability to cross-pollinate. You can now find mint plants with distinctive flavors like chocolate, pineapple, wintergreen, lemon and apple.

If you aren’t into foraging, this hardy herb is so easy to grow that even the horticulturally clueless can plant a sprig and watch it flourish into a patch in no time. But beware: “Mint can completely ruin a garden,” warns Gail Ingraham of Bellwether Herbs and Flowers in Suttons Bay. “It just spreads and takes over and is very hard to contain.” She recommends planting in a container, or a garden area with some kind of barrier surrounding the plants (like sunken railroad ties). Certain kinds of mint, like silver mint, add an element of beauty and design to window box gardens. Mints also do well indoors and can tolerate growing in low light. Simply take a cutting, place it in a glass of water and let it root. You can then transplant it to container or garden. Trim or pick the tops of plants to keep the patch looking full.

The more you pick mint, the more it grows, which means it’s time to get creative and use the stuff. Fresh mint makes dreamy tea, hot or iced. Try it tossed with sliced tomatoes drizzled in balsamic vinegar. Chewing fresh leaves is an instant breath freshener (handy!), and a sprig or two makes great garnish in hot chocolate or on a plate of summer fruit. Or you can dry it to enliven teas, potpourri or sachets (see recipes).

So next time you catch the scent in the breeze, breathe deep, give into that ancient invigoration and grab a bunch to welcome spring to the North Country.

Try another delicious treat from the forest—violet cupcakes!