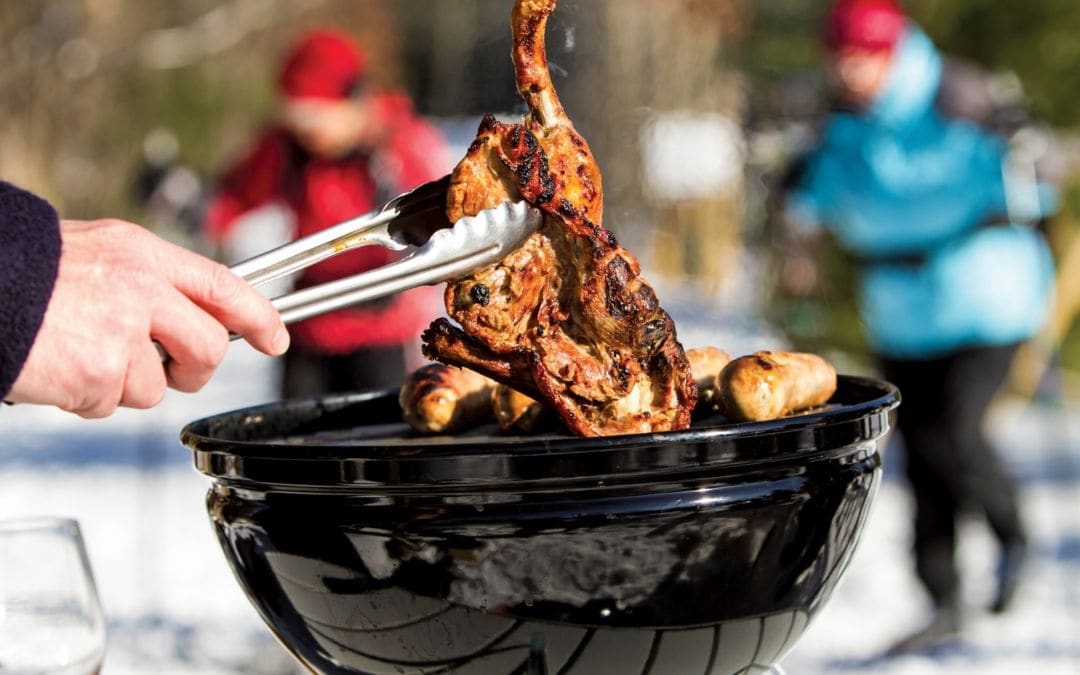 Until recently winter grilling was considered a silly, cabin fever–inspired stunt—the cooking equivalent of stripping down to your skivvies and leaping through a hole hacked in the lake ice. You had to be crazy or Canadian (or both) to want to cook outdoors in the middle of February.

But now winter grilling is being called the “new obsession” of cooks in snowy climes everywhere. The once oddball hobby has gone mainstream in a few short years thanks to easy-to-light natural gas grills, high-end ceramic outdoor cookers and now, hulking stainless steel, double-insulated infrared grills that heat to a bone-charring 1,600°F and make searing steaks in subzero temperatures easier and quicker than ever before.

It felt both good and bad to find out one day that something I’ve been doing forever is suddenly considered the ‘in’ thing. Good because I was getting a tad lonely being the sole member and founder of my own little club—the Polar Bear Grilling Club (Northwest Lower Michigan Chapter). Bad because a lot of the same articles and Food Network shows saying cold-weather grilling is hot are also telling backyard chefs they need a whole bunch of specialized gear to do it up right.

An infrared grill (like the $5,000, 42-inch Solaire “InfraVection”) will certainly say you’re serious about grilling. In cold weather, natural gas grills do light easier and burn more reliably than ones powered by charcoal and propane. But, as my crazy Canadian chef friend—the award-winning, book-authoring, grilling Zen Master Ted Reader—says, where winter grilling is concerned, all you need is the patience and desire to go out there.

“Just because it’s frickin’ cold outside doesn’t mean we shouldn’t enjoy ourselves outside,” Reader likes to say. Along with a little fire and smoke, this philosophy is what the essence of grilling is about.

So don your long johns and your fur hat (Reader recommends a toque for your noggin and “a backyard propane heater, de-icing salts and snow goggles in case of a blizzard”), get out there, and have fun. You can generate more than enough of those precious cooking BTUs with an old kettle-style grill and heap of charcoal to create food that tastes even better now than it does in summer.

Stick to foods that take a relatively short time to cook—steaks, chicken breasts, hamburgers, and kabobs. To reduce cooking time outdoors, start dishes like ribs in a crock pot or the oven before finishing them off on the grill.

When propane gets cold—and especially when the fuel is cold and the level in your tank is low—it will burn sluggishly. Try keeping propane tanks in the garage (not in the house) or in a well-ventilated area where it’s a couple of degrees warmer right up until grilling time.

Keep the grill lid on. No matter what kind of flame you grill over, every time you lift the lid you’re letting all that precious heat escape.

Keep the fire burning. You will probably need twice as much charcoal in winter to maintain cooking temperatures. To do this, use a charcoal chimney and fire up a second batch of coals to keep on hand, adding fresh briquettes to the fire (using a pair of heavy-duty tongs) when the grill temperature begins to cool.

For a covered grill without a built-in temperature gauge, open the lid vent slightly and insert a grill thermometer. To check the temperature by feel (the old-fashioned way), cautiously hold your hand 3 to 4 inches above the grate of an uncovered grill. Count the number of seconds you can hold your hand in this position before the heat forces you to pull it away:

BBQ Recipes Perfect for a Michigan Winter (or anywhere, anytime)