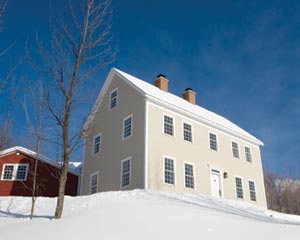 In 1800 in Michigan’s Northwoods, there were no homes that looked like Dave and Jackie Amos’s. But if some enterprising and independently wealthy gentleman from the more civilized East Coast had found his way to this spectacular hillside in Leelanau County, he would have built a classic colonial farmhouse that closely resembled the Amos home—a house that is a compromise between the couple’s love of New England vernacular architecture and their desire to live in Leelanau County.

“We love the simplicity of New England homes,” Jackie says. “They are the quintessential American home—not ornate, very clean lines, classic style.” Beyond those qualities, the Amoses didn’t want a contemporary open floor plan. “We had one in our last house, and it didn’t feel cozy,” Jackie says. After Dave retired from Ford several years ago, the couple explored the idea of moving to Hudson Valley, home of West Point where Dave had gone to school. But for years they’d vacationed in Leelanau County, and they found they didn’t want to leave Northern Michigan behind. “We finally decided that if we were going to deal with winters in the Hudson Valley, why not Leelanau?” Jackie says.

Knowing they wouldn’t find a Northern Michigan home old enough to fit their colonial tastes, the couple hired Suttons Bay architect David Hanawalt to design them a new home that looked old. Although Hanawalt is known for his modern design, his portfolio spans many styles—and childhood memories spent with his grandparents in Connecticut, where his grandfather was curator of the New Haven Colonial Historical Society, made the architect particularly comfortable with the colonial genre. 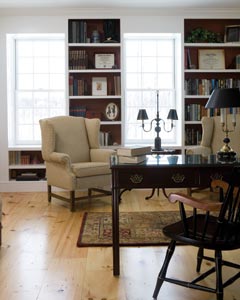 Hanawalt researched colonial floor plans and elevations before drafting a classic center-hall, two-chimney colonial farmhouse distinguished by a dining room/library and a living room off the foyer. With their size, shape and identical fireplaces, these front rooms speak of an old farmhouse that began with one room and was added onto as the family grew. As a historical home would also have it, both rooms lead to a butler’s pantry, then into the kitchen—where Hanawalt originally designed a generous cooking hearth that Jackie nixed. “I started laughing when I saw it,” she says. “I said to David, ‘I may want a period home but I don’t want to put on a little white cap and apron and stand over a fire!’”

Other historic touches felt less anachronistic. The Amoses wanted their home to be eco-friendly, including using as many local materials as possible. They were thrilled when their builder, Mark Norton of Norton Custom homes, located a supply of eastern pine from Beaver Island for the floors. Norton had the lumber kiln dried and milled in Leelanau County, then faced the 10-inch planks with old-style cut nails when he put them down. The builder went on to fabricate the period raised panels for the interior walls on site, and hand-carved the cherry banister to match a picture Jackie had found in a magazine.

Hanawalt took the exterior back in time by designing an adjoining garage that is tucked in the back of the home, painting it red to make it feel like a small barn. Historically accurate paned windows—nine panes over nine on the first floor, and six panes over nine on the second—and cedar clapboard that is milled to six inches in width, thinner than most contemporary siding, complete the facade. One last Hanawalt touch is a stacked stone fence along the hillside in front of the home that is reminiscent of an old foundation—a common sight on New England farmsteads.

Tucked into its steeply sloped hardwood site (the couple removed as few trees as possible) the Amos homestead is as picturesque as a scene from a New England calendar. But the home has something no New England farmhouse will ever have: a sweeping view of West Grand Traverse Bay.