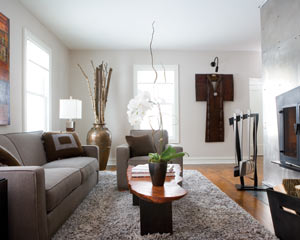 Nancy Bazemore’s Traverse City home has a past. It has a history, too, presumably, but Bazemore hasn’t yet researched the details. What she does know is that her century-old, historic district house once enjoyed a run as T.C. Party Central. “People are always telling me, ‘Oh, I’ve been in your house,’” Bazemore laughs. “Everybody of a certain age around town has either lived here or partied here or both.”

Bazemore, a woman of modern sensibilities, gets a kick out of her house’s reputation. After all, why should a house be stuffy and stodgy just because it’s old? Under her ownership, the Webster Street address has undergone a dramatic makeover that proves a historic house can be every bit as contemporary and personal as a new home.

When Bazemore moved to Traverse City in 2004, the house was one of the few large (but not Sixth Street huge) properties available inside the city limits. Although its wild days were long over, it was still split into the four apartments that had once housed so many young partiers, and it needed serious structural repairs. Yet Bazemore, a veteran of several remodeling and building projects, was undaunted. She set about to restore its single-family status and bring it, at least on the inside, into the 21st century.

On the outside, the goal was to turn back the clock. Builder Andrew Craven, an experienced hand in restoring Traverse City’s historic homes, saved the front portico and rehabilitated the original windows around the front door. A sagging side porch was ripped off and rebuilt, and the foundation was repaired with matching stonework. Although a new garage with second-floor space was added to the back of the house, the construction was tied in with new siding, windows, and paving materials that replicate the vintage style. 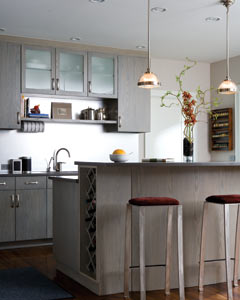 Returned to its grandeur, the exterior of the house conjures up visions of Gibson Girls strolling down the front steps in ostrich-plumed hats, ruffled parasols dangling from their arms. But one step inside explodes that image. In the foyer, metallic print cushions and metal mesh “splats”—edgy versions of sconces— announce that frills and feathers won’t be found here.

Instead, Bazemore has finished her house with sleek furniture, elemental colors, crisp trim, vessel sinks, and a flat-screen TV. She had the existing fireplace completely rebuilt—the firebox was lifted off the ground, the structure made larger and stronger—and commissioned Suttons Bay artist Robert Purvis to wrap it in stainless steel. The tower of metal sets the tone and complements her collection of contemporary art and art furniture, most produced by local artists and some purchased specifically for this house. Her only nod to the past is the chocolate-brown walnut flooring in every room and a few pieces of heirloom furniture.