At Home on the Hill, an Essay 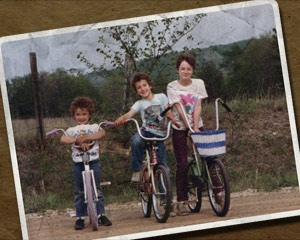 Hillbilly is a term used by country people to describe themselves with pride. Others might use it to suggest a lack of sophistication; perhaps it’s both.  I grew up knowing I was a hillbilly and I was ok with that. We lived on a hill so it seemed to make sense.

My mom would argue and say that we were farmers. Sure, we raised chickens, rabbits and pigs but not too much grew in the vegetable gardens. Our home was nestled on what the local gardeners referred to as “sand and rocks”. That’s just how it was on Chandler Hill.

Located in Chandler Township, which is safely tucked away in the northeast corner of Charlevoix County in Northern Michigan, that’s where the hillbillies are. That’s where home is! Home is rolling hills, winding gravel roads and miles of beautiful hardwoods. Seventy five percent of Chandler Township is state land.

Maybe you’ve heard of it. Not too far from the annual Mushroom Festival in Boyne City, people came from all over, even out of state, to hunt for morel mushrooms on Chandler Hill. I think back on this with a twinge of bitterness since quite often the prize winning morels were picked right off my hill. Yet, I never found as much as a handful myself.

Chandler Township was settled in the 1870s by Cobbs & Mitchell, one of the largest logging companies of that time. We settled there the summer I turned seven, and it wasn’t hard to imagine the first settlers with their lack of amenities, since the thick forest caused our electricity to go out quite a lot those first few years. That was one big difference from my friends who lived in town, but we learned to enjoy it. My dad would light the old oil lamps that had belonged to my great grandpa and we would tell stories and play cards until there was light again.

We hadn’t been living on the hill for more than a day or so before I considered the neighbor kids not only my best friends, but surrogate cousins as well. We weren’t really related to our neighbors but most of them were related to each other. Their families had been living on Chandler Hill for generations.

There’s something to be said for the hospitality of the people in Chandler Township. They were quick to make us feel at home on the hill. Those long summer days of riding bikes, climbing trees and going on hardwood safaris stretched into hot nights spent catching lightning bugs in Mason jars and listening to the adults talking on the deck well into the darkness.

We took advantage of the long days and explored every inch of that township, from the corn fields where we were forbidden during hunting season to the creepy shack deep in the woods where a drifter was rumored to be staying. We snuck a peek in the windows of the abandoned house on the corner and pedaled our bikes away as fast as our short legs would take us when we were sure that we had seen a ghost inside. My dog Ruby ran happily alongside the whole time.

My sisters and I often walked to “Nowhere” which was merely a ten foot gap between two signs, one pointing south that read “Entering Chandler Township” and the other facing north reading “Entering Hudson Township”. We thought it was maybe a magical place where time stood still. Then again, time always seemed to stand still on Chandler Hill.

It was a simple way of life there. Call it unsophisticated if you want, but I knew everyone on the hill and always felt safe. No matter where we ventured to during the day I always felt like I was at home. I considered the hill mine, the whole township mine. All the roads and trails that had carved their way across the hill, like wrinkles showings its age, they belonged to me too.

The Chandler Township Hall for instance, seemed as if it were an extension of my own living room at times. Having attended countless graduation parties, baby showers and weddings there, the old hall became a part of my childhood along with the rest of the township. In the 1950s it was the Chandler Township Schoolhouse. I can’t help wondering what it would have been like to attend school there in the one room building.

Running untamed on the hill I poked at frogs in the swamp and got my shoes wet and muddy splashing in the creek. I wriggled under the neighbor’s fence and ran through the horse pasture that doubled as our baseball diamond. I adopted Lila Magee as my substitute grandma and I thought her somewhat of a celebrity since the road we lived on bore her name. Despite her celebrity status, she didn’t mind us kids eating her cookies, playing in her corn crib or searching for hidden treasures in her old barn.

Pretty much every summer was spent that way until I reached high school. Then school, sports and part-time jobs took up most of my time. In the evenings after softball practice, I would still make time to stop at Thumb Lake and watch the sun set. Alone on the beach I remembered ice fishing with my dad and the time I wrecked the snowmobile. I remembered hauling firewood and having picnics in the woods and I tried to imagine what my life would be like when I grew up and moved off the hill.

After going to college and joining the corporate world, I often wish I could go back to being a kid on the hill where time stood still and life was unsophisticated, simple. A lot has changed out that way since I left. I’m grateful though that much of my family still lives there today, and I can go visit my woods, my trails and my childhood whenever my heart is feeling heavy and longing for the simple ways of Chandler. Having claimed it as my own, some 20 years ago, I will forever feel at home on the hill.