Checking in With the Vasa Grooming Crew 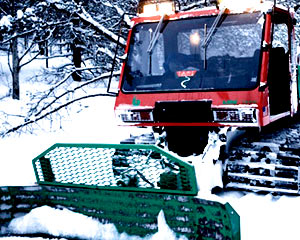 With the Vasa cross-country ski race coming up this weekend, and snow melting everywhere, we thought would be good to check in with the Vasa trail grooming crew to see how our marquee XC trail has fared. “As long as we have a good base and we can work on it, it should be in good shape,” says chief groomer Jim Dombrowski. Once below-freezing temperatures return on Thursday, the groomer crew will be able to get back on the trail and will have a few days to fill in any thin spots that might have appeared, like on the sunniest hillsides, for example.

But as for a good base, the area’s bountiful snowfall this winter did put us in good position to weather February’s thaw. Dombrowski has spent about 40 more hours grooming this winter than last, and if you multiply that by all the other men on the crew, you’d have a total of more than 200 additional grooming hours, thanks to deep snows that started in November and have been piling up ever since.

All that work has taken a toll on the equipment, too, says Missy Luyk, trail program specialist at TART Trails, which manages the Vasa and Leelanau Trails. A track busted on the big Vasa trail groomer in January, and crews worked overtime to fix it for the race this weekend.

The groomer on the Leelanau Trail likewise broke down. And in the spirit of trail commitment, groomer Dave Monstrey fired up his welder and metal fabrication gear to make a from-scratch groomer that pulls behind a snowmobile. In a moment of recycling genius and trail wholeness and poetic circularity, Monstrey incorporated old rail spikes from the railroad bed that the Leelanau Trail is built upon. “I just cut off the heads and welded them on to get the surface texture like corduroy.” In classic Northern man humbleness, Monstrey just says, “yeah, it works pretty good.”

TART groomers have been out 42 total times this season, says Luyk, who keeps tabs on those sorts of things. They’ve gone 1,070 miles and put in 330 hours, and given the bad equipment karma this season, the crew has had to volunteer 200 off-trail hours on equipment repairs.

Give thanks. And, of course, you can give money too, to keep gas in the groomer, rubber on the treads, and men heading out at 4 a.m. so you can ski on immaculate trails at 8 a.m. The easiest way is to buy a grooming badge.