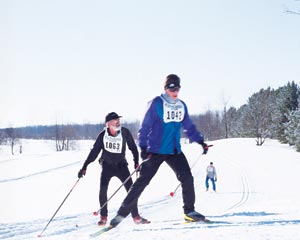 It’s hard to believe that just a few decades ago, folks didn’t ski much, at least not cross-country, not even here in Up North’s snow belt.But that’s how things were: Quiet in the pines. Even here in Antrim County, where winter’s white consumes the rolling, forested terrain, claiming it all, blanketing toylike Victorian towns and frosting evergreens.

Back in the mid-1970s, cross-country skiing got the respect of, say, shuffleboard, even among outdoor enthusiasts. Then came a single Olympic silver medal, and it changed perceptions of the overlooked winter sport. Particularly here in Antrim County’s snow country. Today, especially for one weekend, you’ll find the woods around Bellaire filled with hundreds of skiers, flying through a white world.

On a lucent February afternoon in Up North’s snowiest landscape, skier No. 120 sails over the finish line and shouts, “Praise the Lord!” Well-wishers in Sorel boots whistle. Applause erupts from volunteers clustered near a table of red licorice, Oreos and Wheat Thins.

The last of more than 700 competitors in the White Pine Stampede are finishing up, a parade of Lycra and ski poles and hallelujahs! The annual event has become a ritual glide for hundreds, and the centerpiece of a weekend mingling intimately with winter.

Praise the Lord, indeed, says Dave Barrons—a meteorologist who’s a local celebrity, and has worked on the race for years—because, as he sees it, cross-country skiing is next to godliness.

“Think about the speed, the grace, the smoothness,” he says. “My goodness, you can just fly. You get a rhythm going and you just consume ground.”Cross-country’s turning point came in 1976, when Vermont skier Bill Koch stunned global crowds by medaling in a Nordic event at the Innsbruck, Austria, Olympics. It was the first such win by an American in nearly 50 years. Who’d a thunk? The result of this unexpected Go-USA victory was an avalanche of home-soil interest in gliding across pure, white snow.

That first year, about 90 racers set out and only 42 finished, thanks to a wicked wind-chill. But they kept it up, winter after winter, even after ski-race-dreamer Konopicki passed away. Now, 27 years later, the White Pine Stampede is the state’s oldest such race. More than 700 racers hit the trails and many others center a weekend Up North on the event.

True, the fudge shops are closed, the lakes half-frozen and most boutiques are shuttered for the season, but you will find warm, well-lighted places to settle in after a day of undiluted winter. You’ll also find snow tubing and eagles and the region’s best omelets. That, and a good cup of joe.

The Stampede itself is much like the Bellaire area in winter: Unpretentious, dominated by snow. As races go, it is humble, drawing a kindred crowd and eschewing loud beer-company sponsors. Serious cross-country competitors are here, certainly. But the race also draws a fair share of just-for-fun skiers, families and couples who can be assured of getting a medal. Everyone does—you just have to finish and not get lost on the way home.