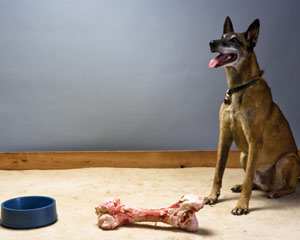 If the sun is shining just right, you can make out a military serial number tattoo, C261, on retired military working dog Ringo’s perked ear. And his ear is perked a lot these days—sometimes accompanied by a good-natured chop-lick—when he spies squirrels, owls and pileated woodpeckers in the forested bluffs behind his new home on Old Mission Peninsula.

“He’s adjusting to just being a dog,” says his adoptive owner Pam Davis. “He was used to working 12-hour days, as a patrol dog first, then a bomb dog.” His last tour of duty was as a bomb-sniffing dog in Kuwait, and he still “clears the room” when he enters a new place. His breed, Belgian Malinois, has an amazing sense of smell. “You should see how excited he gets just with the smells of a normal family’s cooking,” says Pam. 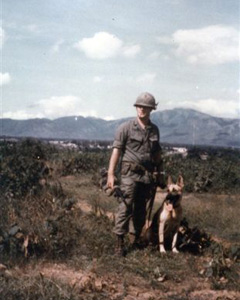 Ringo is the first dog Pam and her husband, Doug Davis, have had in 38 years. “Our kids knew I was a dog handler in Vietnam, and they always wondered why Dad never wanted a dog,” says Doug. Sergeant Davis worked alongside dogs Copper, Bullet and Mike, and served in the bush of Phu Cat with Smoke. After the war, military working dogs were considered excess equipment and were either destroyed or left in Vietnam. Doug still remembers Smoke’s serial number—978X—and credits him with helping him get out of Vietnam alive. Happily, since 2001, retired military dogs, if adoptable, are allowed to retire to a loving home. “Most handlers would love to adopt their own dogs,” says Doug. “But often it’s just not possible to own a dog while in the military.”

So when Doug learned Ringo needed a family, he and Pam dropped everything and drove 40 hours to pick up Ringo, described to them as a 4-year-old dog trapped in a 9-year-old body, in Colorado. “I was surprised at how big and how strong he was,” says Pam. “I was used to the kind of dog you put PJ’s on and put in bed with you!” Getting used to life as a civilian has been a big adjustment for the good-natured, attention-starved Ringo, who has never been around squirrels—or cats. The Davises keep an extra-attentive eye on Ringo when their mellow black-and-white cat parades by (only after getting home did they learn that at his first adoptive home he chased and ultimately swallowed an entire skunk). But life in Northern Michigan suits. Tumors on his hindquarters, likely caused from spending most of his days on cement, are almost entirely healed. And he’s enjoying a lot of firsts: first time lying on carpet, first bone, first chance to curl up in front of the fire. Until another squirrel hops by.—E.B.T. 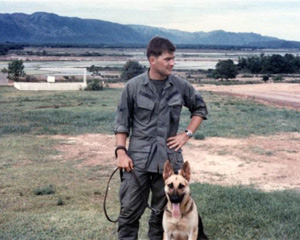 Sgt. Doug Davis (above and at right) in 1968 with his partner, MWD Smoke 978X in Phu Cat, Republic of Vietnam. Says Davis, “There are very few photos of us because we mainly worked at night. It wasn’t a good idea for a picture a mile in the bush at 3 a.m.”