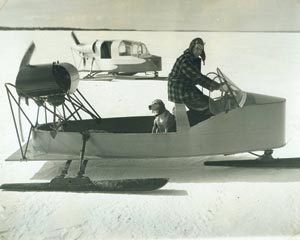 Glenn “Pop” Bailey and his hunting dog, Dawg, pause for a picture on their predecessor to the modern snowmobile on Potagannissing Bay near Drummond Island in the winter of 1946–47. George Abel Litchard made the first aero-sleighs back in the 1920’s, but it was Blain “Bun” Wing of St. Ignace who really perfected the idea of the snow scooters in the 1940’s, manufacturing them under the name of Wing Aero-Sleighs. And by perfected we mean this: They flew like a bat out of hell, about 125 MPH, though the speeds were approximate—there were no speedometers. If they hit a bump on the ice, they could go flying 100 feet, earning the nickname pick-up sleighs. Ear-crushingly loud and without heaters, comfortable they were not.

But slicing through snowdrifts and skating effortlessly across the ice, the propeller-driven crafts were ideal for fishing, coyote hunting, hauling ice or just cruising around.